The Big 12’s No. 6 Baylor Bears face off against the Pac-12’s Arizona Sun Devils this
Wednesday night as part of the betting action in year’s Battle 4 Atlantis competition.
Tip-off on ESPN2 is set for 7:30 p.m. from Imperial Arena in Nassau.

Baylor continues to move up the national rankings behind its perfect 4-0 straight-up start. Last
season’s national champs are coming off a dominating victory over another Pac-12 program
Stanford. Given the Bears’ early play, this winning streak should continue into the month of

December ahead of a major showdown against Villanova on the 12th of next month.

The Sun Devils have stumbled out of the gate with a pair of SU losses to complement two
expected wins as heavy favorites. Facing a nationally-ranked team at a neutral site is probably
not the best way to try and turn things around.

On paper, an early season matchup between two teams from major conferences made things
interesting. Noting the early form for each of these teams, Baylor should roll to win this game
with relative ease. The Bears have looked sharp on both ends of the court. They only way this
game stays closer than the spread is if they look past this game while enjoying the warm
weather in the Bahamas.

Baylor has been able to score at least 86 points in each of its first four outings. Defensively, the
Bears have not allowed more than 60 points in any of those dominant wins. The only game they
failed to cover as heavy double-digit favorites was the season-opening 87-60 victory against
Incarnate Wood. The closing line in that game was 33.5 points.

The total has stayed UNDER in Baylor’s last two games, including Saturday’s 86-48 rout over
Stanford as a 14.5-point favorite. The total line in that game closed at 140 points.

According to ESPN’s power ranking index for each team, the Bears have a 75.5% chance to win
this game SU. That appears to be a bit low given the gap in talent and current form. Baylor’s
lineup goes five deep with players averaging at least 10 points per game.

Guard LJ Cryer leads the way with 18.5 PPG while shooting 63% from the field and 53.8% from
three-point range. Guard Kendall Brown is a close second with 15 PPG. He has converted on
69.4% of his shots this season. The Bears, as a team, have shot 50.5% with a 35.4 shooting
percentage from three-point range. They are pulling down an average of 42.5 rebounds a game.

The Sun Devils got tripped up by UC Riverside 66-65 on Nov. 11 closing as 8.5-point favorites.
Their second loss of the season was against San Diego State on Nov. 18. Losing 65-63, they
did manage to cover as eight-point underdogs in that game.

The total has stayed UNDER in all four games behind a scoring average of 69 PPG. The Sun
Devils has allowed an average of 63.5 points a game on defense.

Forward Kimani Lawrence is one of three Arizona State players scoring in double figures this
season with a team-high 16 points a game. He also leads the team in rebounds with 10 a game.
The Sun Devils have been a bit short-handed in the early going with as many as five players
missing at least one game.

Overall, the Sun Devils are shooting 42.6% from the field. This drops to just 29.7% from three-
point range. They are pulling down 38.8 rebounds a game with a total of 49 boards in four
games on the offensive end of the court. 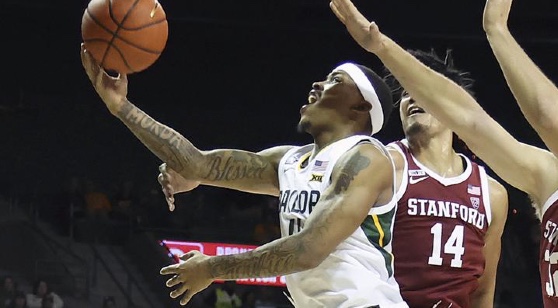 Baylor has covered the spread in three of its last four games. (AP)

Inside the Stats - Baylor Bears

I do not see this game staying all that close from the start. Give credit to Arizona State for
hanging tough against San Diego State its last time out, but Wednesday’s clash is a major step
up in class. Baylor has its sites set on much bigger things this season in defense of last year’s
national title.

These two teams last met in the 2013 NCAA Tournament with Baylor coming away with a trilling
89-86 victory as an 8.5-point favorite. The Bears have won all four of the previous meetings
between the two SU. They are 18-2 SU over their past 20 games overall with a 12-8 record
ATS. The total has gone OVER in 16 of those 20 games.

Arizona State has lost nine of its last 20 games SU with a 6-14 record ATS. The total has now
stayed UNDER in six of its last eight games dating back to last season.