The Memphis Tigers (4-0) and Virginia Tech Hokies (5-0) tangle in an NIT Season Tip-Off game Wednesday at Barclays Center. Tip-off is scheduled for 9:30 p.m. ET, and the game can be viewed on ESPN2.

The Memphis Tigers have played four games, and they have haven't really been tested. The closest pass was last time out against Western Kentucky of Conference USA, winning 74-62 on Friday night. It was also the lowest scoring production of the season after going for 89, 90 and 90 in the first three games this season for the Tigers.

The Virginia Tech Hokies are in the same boat. The ACC representative has a handful of games under their belt, but they haven't really been tested yet. The team does have one true road game, winning 77-57 at Navy on Nov. 12, so that counts as more of a pop quiz instead of a full-blown test. The one thing that bettors have learned about the Hokies, they cover. Virginia Tech is not only a perfect 5-0 SU, but 5-0 ATS. Defense has been a hallmark of this team, too, so it will be interesting to see how they handle Memphis, a Top 10 team.

Memphis carries a Top 10 ranking into this game, but it's more the result of a preseason ranking and expectations rather than anything it has done to date. Yes, the Tigers have topped all four of the opponents presented to them, and they haven't really been tested, but it's difficult to tell if they're truly one of the top teams in the nation or not.

The Tigers opened the season wit ha win over Tennessee Tech of the Ohio Valley Conference, but just missed a cover as 28.5-point favorites as the OVER connected. The Tigers then roughed up North Carolina Central by 39 points, and then they topped St. Louis by 16. The 90-74 win over the Billikens as 10.5-point favorites might actually be the most impressive win to date, and a good guide for this outing.

C Jalen Duren had rolled up 15.0 PPG and 10.8 RPG with 4.8 BPG, one of the biggest contributors to the 3-1 OVER result for the Tigers. F Emoni Bates is good for 13.3 PPG, 3.5 RPG, 2.3 APG and 41.7% from behind the 3-point line, too. While Memphis has six players with 8.0 PPG or more points, the Tigers have just two players, Bates and Duren, averaging double digits in points. The Tigers do have 10 players going for 4.0 or more PPG so far, though, showing their tremendous depth.

Memphis making its first neutral-site appearance of the season. They were 6-4 SU/ATS last season when playing on a neutral floor, but 5-1 SU/ATS in the final six, including a run all the way to the NIT Championship.

The Hokies have a perfect 5-for-5 record against the number. Facing the likes of Maine, Navy, Radford, St. Francis (PA) and Merrimack isn't exactly a murderer's row. Yes, Virginia Tech did have a true road game Nov. 12, stepping out of its home atmosphere to get somewhat of a test, but we still don't really know what we have with the Hokies yet. The polls aren't buying the Hokies yet, as they're 5-0 but without a ranking. All teams can do is win the games scheduled for them. And not only is Virginia Tech winning, they're covering, too.

Like Memphis, Virginia Tech will be playing its first neutral-site game of the season. Unlike the Tigers, the Hokies struggled in such situations last season. They closed out the season with a one-and-done in the ACC Tournament, and a 75-70 overtime loss to Florida in the NCAA Tournament first round. They did have an 81-73 overtime win over Villanova at Mohegan Sun Arena in Uncasville, Conn. last season on a neutral-site floor, perhaps its most impressive win of the season, so the Hokies are hoping for a similar result here. 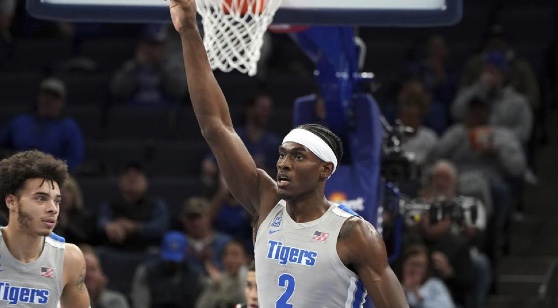 Inside the Stats - Memphis Tigers

Inside the Stats - Virginia Tech Hokies

The Hokies have fared well so far, and they passed the minor test at Navy. But facing Memphis will easily be the biggest test of the season. The Hokies boast four players averaging double-digit point totals, but that production also came against some rather shabby teams. Virginia Tech actually ranks No. 1 in the nation in scoring defense (48.2 PPG), but who have they played? Memphis is going to ruin that scoring average in a big way. Virginia Tech has allowed opponents to hit 34.3% from the field, and that's its calling card - suffocating defense.

The Tigers have tremendous depth, and that will be the difference in this battle of unbeatens with the Hokies. When the key contributors in the starting lineup need a breather, or there is some foul trouble, there isn't a giant drop-off in production when the bench players fill in. Memphis has been hitting its shots, going 52.6% from the floor to rank 10th in the nation. They have also boasted tremendous perimeter defense, holding the opposition to a dismal 24.2% from behind the 3-point line. That will be the key in this game, as Virginia Tech is hitting 42.5% from downtown. Whomever wins that battle will win the game, and I'm thinking that's Memphis.