The Connecticut Huskies (4-0) take on the Auburn Tigers (3-0) Wednesday in the Battle 4 Atlantis tournament opener at the Imperial Arena in Nassau, Bahamas. Tip-off is scheduled for 2:30 p.m. ET, and the game can be viewed on ESPN.

It's four up and four down for UConn so far, topping Central Connecticut State, Coppin State, Long Island U and Binghamton, but those four teams pale in comparison to the challenge Auburn brings. It's the first ranked opponent for the Huskies, and the first true measuring stick after facing four tomato cans. UConn has been favored by 29.5 or more points in each outing, but that obviously will not be the case in this holiday tournament.

The Tigers have faced a little more difficult of a road, topping Morehead State, UL Monroe and South Florida. Auburn has been favored by 12.5 or more points in its three games to date. Auburn dusted Morehead State in the opener, winning 77-54, and they tattooed UL Monroe by a 93-65 score, its highest offensive production of the season. On the way to the Bahamas the Tigers stopped off in Tampa for a battle at South Florida, its first true road game, and they faced a Bulls team which through a blanket on them defensively. It was a good test, and the Tigers were still able to grind out a victory in a low-scoring game.

Connecticut hasn't faced any adversity so far, while Auburn has been tested at USF, and that test should serve the Tigers well in the opener of this event.

The Huskies have up 87 or more points in each of their four outings to date, as none of the lower-level teams UConn has faced offered much in the way of resistance. That will change dramatically against the Tigers. UConn has alternated covers and non-covers so far, going 2-2 ATS, while also splitting the OVER/UNDER 2-2.

UConn is third in the nation in scoring at 92.0 PPG, but that's a little misleading given the lack of quality opponents it has faced to date. Conversely, they're fifth in the nation defensively, yielding just 51.3 PPG, while ranking sixth in defensive FG% at 33.0. Those numbers are certain to change as they face a power conference team, and a ranked one at that.

One thing that is a bit concerning about the Huskies is their ability at the free-throw line, as UConn is hitting just 73.6% from the charity stripe, ranking 98th overall. That's not horrendous, but it's not terribly impressive, either. In close games against a much better caliber opponent, they need to be markedly better.

The Huskies are playing their first neutral-site affair of the season. Last season the Huskies were bumped off in the first-round of the NCAA Tournament by Maryland, and they were 2-2 SU/ATS in four neutral-site games while the UNDER cashed in three of those outings.

On the surface, it looks like Auburn might be in for some trouble. It is only averaging 76.0 PPG to rank 127th in the nation, but the average is a rather small sample size, and down significantly after its low-scoring win at South Florida. It's probably little closer to realistic on what to expect the remainder of the way.

Auburn has struggled shooting, hitting just 43.2% from the field, while knocking down a dismal 29.3% from behind the 3-point line. They're also having some issues at the free-throw line, going just 72.7%, but that can all be changed in the blink of an eye with one good game. The averages are used rather loosely during the early going, although they paint a better picture of Auburn since they have played a decent South Florida team, than the stats for UConn, who has played no one.

Defensively, Auburn is 22nd in the land with just 57.0 PPG allowed, and they have a decisive 36.3-to-29.0 rebounding advantage so far.

This will be Auburn's first neutral-site game. Last season the Tigers went 2-1 SU/1-2 ATS, with a loss to Gonzaga on Nov. 27, 2020. They also hit the UNDER in two of those three outings. 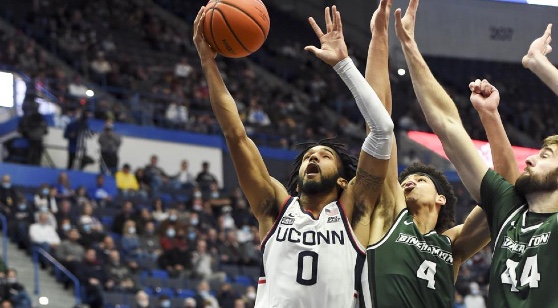 Jalen Gaffney is one of five players with 10.0 or more points per game so far this season for UConn. (AP)

Inside the Stats - UConn Huskies

Inside the Stats - Auburn Tigers

I am leaning toward Auburn winning this game, only because they have already faced adversity, and the Tigers were able to pull through. Sure, a ranked team probably shouldn't be struggling with a very mediocre South Florida team. However, the game was at the Sundome, the first game away from the friendly confines of its home gym, and the Tigers were put to the test. They were able to pass.

We haven't seen UConn face anybody of note yet. We haven't seen the Huskies play outside of their own building. We haven't seen UConn outside of its comfort zone, and no one has pushed them around, or even come close. We don't know how this team is going to respond. Yes, they have some gaudy point totals, statistics and lopsided results, but few, if any of the opponents they've faced are going to be playing in March for anything of note. Auburn will be, and this is a good measuring-stick game for both schools. I like that Auburn has been pressed already, and they were able to gain valuable experience. This will be a good game for UConn, but it's going to result in an 'L', and a learning experience, not a win. But they might very well play their best game of the season in a losing effort, rather than the blowouts against the four cupcakes they have faced to date.