The Big East’s Xavier Musketeers and the Big 12’s Iowa State Cyclones clash this Wednesday
night as part of this year’s Upsie NIT Season Tip Off.
Held at the Barclays Center in Brooklyn, Wednesday’s contest is slated to get underway at 7
p.m. (ET) on ESPNU.

This should be an interesting matchup between a pair of 4-0 teams (straight-up) looking to
continue their hot start. The slight lean in this game goes towards Xavier in a defensive battle
that should keep the final score UNDER the total betting line.

Xavier caught everyone’s attention early with its stunning upset over Ohio State. The
Musketeers were not ranked nationally to start the season. However, they have made their way
into the AP’s national rankings behind the 4-0 SU run.

Iowa State is also off to a strong start, but the Cyclones need to post a few quality wins to catch
the attention of the national polls. A SU win on Wednesday night would be a strong move in the
right direction. I have Xavier winning SU, but this game remains too close to call from a betting
standpoint. I do like the betting value in the UNDER on the game’s total.

The Musketeers failed to cover in their season opener as 17-point favorites in a tight 63-60
victory against Niagara. After beating Kent State 73-59 as an 8.5-point favorite its next time out,
Xavier knocked off Ohio State 71-65 as a 2.5-point underdog against the nationally ranked
Buckeyes.

Along with the 3-1 start against the spread, the total has stayed UNDER in three of the first four
games. The Musketeers have not allowed more than 65 points on defense through their first
four contests.

With five different players averaging at least 10 points per game, Xavier has demonstrated
some solid scoring depth in its 73.8-point scoring average. Guard Paul Scruggs is the team’s
leader in points with 15.8 a game. He also leads the team in assists (4.0).

The Musketeers are shooting 43% from the field this season, but they are only connecting on
29.7% of their shots from three-point range in an area that needs some improvement. They are
pulling down a respectable 45.3 rebounds a game as a strong edge under the boards. There is
also room for improvement from the free throw line at 68.4%.

The Cyclones’ level of competition in their SU four-game winning streak is not as impressive.
The biggest win on the board came against Oregon State in a 60-50 victory as slight one-point
favorites. They are 2-2 ATS after failing to cover as 15-point favorites over Kennesaw State (84-
73) and as 19-point favorites against Alabama State (68-60).

With the total staying UNDER 138.5 points in this past Sunday’s 82-47 romp against Grambling
State, it has stayed UNDER in Iowa State’s last three games. This defense has not allowed
more than 60 points in those three victories.

On the offensive end of the court, the Cyclones are averaging 73.5 PPG. Izaiah Brockington
leads a trio of guards in double figures with 13.5 points a game. He also leads the team in
rebounds with 8.3 a game. As Iowa State’s leading scorer, Brockington is shooting 46.3% from
the field. 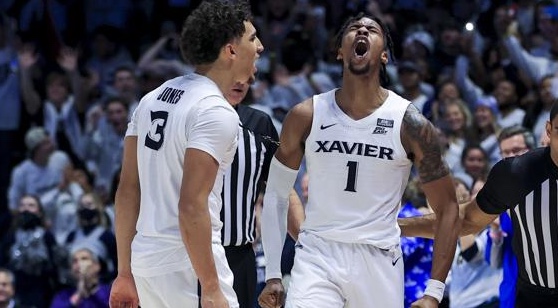 Xavier has covered the spread in three of its last four games. (AP)

Inside the Stats - Xavier Musketeers

Inside the Stats - Iowa State Cyclones

Comparing each team’s early form, Xavier appears to have the clear edge on paper. Yet, I do
not see the Musketeers pulling away from Iowa State down the stretch. The Cyclones’ defense
should keep them in this game deep into the second half.

Each team’s defense should keep the total scoring lower than expected to cash a winner on the
UNDER. The total has stayed UNDER or ended as a PUSH in six of the Musketeers’ last eight
games dating back to last season. The total has also stayed UNDER in five of Iowa State’s last
seven outings.

There is no current playing history between these two teams with just two previous meetings in
the early 2000’s. Those games were split 1-1 both SU and ATS with the total staying under
each time.