The Wolverines are coming off the 68-57 loss against rival Ohio State in Ann Arbor, which splashed serious cold water on Michigan after its thrilling 82-58 rout of Purdue prior to that at Crisler Center. The Wolverines are still just 3-3 SU across the past six games, while covering just once in the past three contests. The 57 points against Ohio State was the lowest total since 53 points in a blowout loss at Illinois on Jan. 14.

The Hawkeyes offense has blown up across the past two games, scoring a 110-87 win at Maryland on Feb. 10 as 3.5-point favorites before humbling Nebraska 98-75 in I-City as a 16.5-point favorites. It's no surprise the OVER cashed in those two games, and four of the past five for the Hawkeyes. Superstar Keegan Murray registered 37 points, six rebounds, three steals and two blocked shots while hitting 15-of-21 from the field in the win over the Huskers. In fact, he is averaging 33.5 PPG, 6.5 RPG and 2.0 BPG in the two-game offensive explosion, while going at least 21 points in four straight and six or more boards in nine in a row.

The Wolverines showed some signs of life with that win over the Boilermakers, but the loss to the Buckeyes again has them projected for the NIT rather than the NCAA Tournament field. It's not too late to turn things around with seven games remaining and the Big Ten Tournament, but time is a factor. It's time to think fast, talk fast and act fast if they wanna get out of this. So, pretty please, with sugar on top, win some games.

For totals, the Wolverines have hit the OVER in 11 of the past 15 games overall, while going 6-2 in the past eight outings on the road. The OVER is 4-1 in the past five following a non-cover, too.

The good news for Iowa is that home team has won each of the past seven meetings in this series, although Iowa is just 1-3 ATS in the past four meetings with Michigan. The home team is 18-6 ATS in the past 24 meetings, while the favorite has connected in four straight meetings. 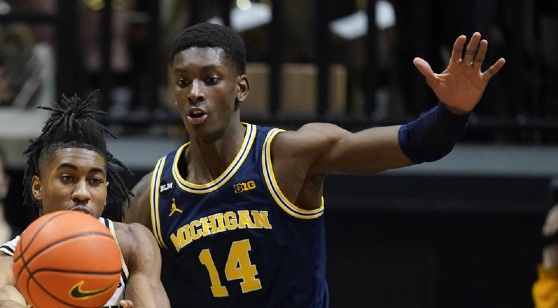 The Wolverines need a big victory on the road, and many more after that. However, Michigan has shown very little evidence that it can play with consistency while ticking of wins against good teams. The Wolverines rolled Purdue, but then couldn't carry over the momentum into their game against their biggest rival. Confidence is low that Michigan will be able to take down Iowa.

Iowa is in a zone right now on offense, and Keegan Murray is single-handedly carrying this team to victories lately. He does a little bit of everything, but the Hawkeyes also aren't a one-trick pony. Pat McCaffery is a legit sidekick for Murray, while Jordan Bohanon contributes in a number of areas and is the most dependable player at the charity line late in games. Kyle Murray is the fourth player averaging at least 10 or more points per game, so this team has depth. They'll be able to keep Michigan at arm's length and grab a home win, which has been the rule in this series lately.