The Volunteers look to turn over a new leaf under new head coach Josh Heupel, and they will look to new QBs Hendon Hooker and Joe Milton to get them off to a quick start. That shouldn't be difficult against a Falcons team which was absolutely horrendous last season, winning all five games, including a 31-3 beatdown at the hands of equally lousy Akron in the regular-season finale.

Bowling Green managed 17 or fewer points in four of its five losses, and they lost each game by at least 25 points. Bettors were very happy with how poor the Falcons performed, as BGSU failed to cover in four of five outings while the Over came through in three of the final four contests. Overall, the Falcons were outscored 225-57, and that was against five fellow MAC teams.

Bowling Green has a couple of players who could be special. RB Terion Stewart gobbled up 7.9 yards per tote last season, and if the Falcons can actually hang in some games, he has a chance to be a big-time player. On defense, LB Darren Anders is the best player on the field in brown, and he'll be tasked with shouldering a big load. The D allowed 6.7 yards per play, and that's something which needs to improve for Scot Loeffler's team in a hot hurry.

Tennessee's shortcomings on defense likely won't be exposed in this game, but it's something to watch down the stretch. They yielded 30.1 PPG last season, but that shouldn't be a problem against an anemic Bowling Green attack. And Tennessee struggled to stop the pass in 2020, but the Falcons aren't likely to hurt them over the top. 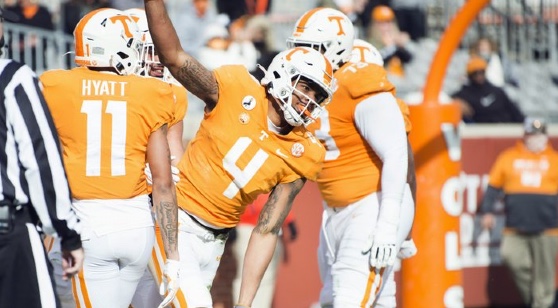 The Tennessee Volunteers have gone UNDER the point total in seven straight home games. (AP)

I don't know if I am quite feeling Tennessee in this opener. Laying more than five touchdowns is a rather tall order for a team breaking in a new head coach, while also using a new quarterback, new offense, etc. Yes, facing Bowling Green is about the best-case scenario, as far as FBS opponents, to help aid in an easy transition, but even one unlikely score by Bowling Green, and you need Tennessee to get into the 40's. I think Bowling Green has enough talent in the backfield to hit double-digits in this one.

The last time Tennessee was favored by more than 30 points against an FBS opponent was Sept. 15, 2018 against UTEP, and they failed to cover that 33.5-point number in a 24-0 win. They're 1-3 ATS across the past four when favored by 28 or more points, too.

Bowling Green has failed to cover its past nine on the road, and they're just 5-16 ATS across the past 21 non-conference tilts. But 35.5 is an awfully large spread against a Tennessee team which has gotten off to sluggish starts in the past few seasons.

The Under is also the lean here, cashing in each of the past four non-MAC game for BGSU, and nine of its past 12 on the road. The Under has cashed in eight straight at Neyland Stadium for the Vols, too, while hitting in nine of the past 12 non-SEC affairs.

I think Bowling Green and the Under makes for a very nice parlay as long as Tennessee remains favored by five or more touchdowns.