The USF Bulls hit the road for Carter-Finley Stadium in Raleigh, N.C. looking to get the second season under the watch of head coach Jeff Scott off on a much better foot. Last season was a disaster for the Bulls, managing just 23.1 PPG while garnering just 5.1 yards per play. The Bulls expect to get a boost with a couple of quarterbacks transferring in. Two former ACC recruits, Cade Fortin from North Carolina, and Jarren Williams from Miami, look to give Scott's offense an injection of excitement.

The Bulls also need to take care of the football much, much better. USF turned it over 17 times in just nine games, and their third-down offense and red-zone offense was dead-last in the American Athletic Conference (AAC) in the COVID-shortened 2020 season. As such, the outlook for South Florida, outside of those in Tampa, is rather bleak. But there is optimism from within the Bulls program, as they have a majority of its starters back, including all five along the offensive line.

The defense was shabby for the Bulls, too, which has to have the N.C. State offense licking its chops. The Bulls allowed a dismal 39.9 PPG and 6.1 yards per play, and that just isn't going to cut the mustard. This D will lean heavily upon LBs Dwayne Boyles and Antonio Grier to try and slow the opposing run game, although there is a lot of concern that the pass rush won't be good enough. They managed just seven total sacks in 2020.

The Wolfpack won eight games in the regular season, flipping a 4-8 season in 2019 to an 8-4 regular season in 2020. Unfortunately for head coach Dave Doeren's group, they lost a heartbreaker to Kentucky in the bowl game, 23-21, although they did cover the three-point spread.

N.C. State was able to battle back after QB Devin Leary suffered a major injury, sidelining him for seven games. He's back, and ready to lead an offense which could be very good. Leary will also have plenty of protection behind an experienced offensive line, including potential conference first-team players Ikem Ekwonu and Grant Gibson in the middle.

The Wolfpack were fun on offense, posting 5.5 yards per play in 2020, and putting up 30.2 PPG after just 22.1 PPG in the previous losing season. Offensive coordinator Tim Beck did a great job, but the Wolfpack need to stress better care of the ball. N.C. State lost 19 turnovers a season ago. 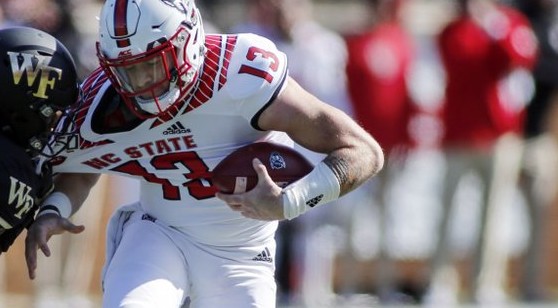 The Bulls have a lot of starters returning, but they have starters returning from a team which was pretty terrible last season. They need a lot of work, and it will take time for either of the transfer quarterbacks to take root. South Florida's defense was also god-awful, and that's great news for the N.C. State offense.

Leary is back for the Wolfpack, and all reports out of Raleigh are that he is moving well and ready to pick up right where he left off before his injury. He will be well protected by a solid offensive line, including two potential All-Americans. The offense should be able to routinely throw up 40 or more points on a regular basis, and they'll hit the ground running against the overwhelmed Bulls.

This game might be a little bit closer if the game were at Raymond James Stadium in Tampa, but the Wolfpack get the Bulls at a raucous Carter-Finley Stadium in front of a group of fans who didn't get to see their team in person very much last season. The COVID rules are a little bit different now, and there is no current cap on capacity. That's great news for the home side, and bad news for a team with a new quarterback.

Look for South Florida to fall behind early, with N.C. State making it look rather easy on offense early on. Over bettors are going to like that, although South Florida's offense will make it a sweat shop. Eventually, a late score by either side will help push this one across the finish line, and that late score might impact the line, too.