After successfully dodging each other’s presence for almost 30 years now, the Alabama Crimson Tide and Miami Hurricanes will square off at Mercedes-Benz Stadium in Atlanta on Saturday afternoon – marking the first meeting between these two schools since Alabama’s victory in the 1993 Sugar Bowl (34-13).

Despite losing a handful primary offensive threats in the NFL Draft this past offseason, Alabama heads into Saturday’s bout with incredibly high expectations – as former Texans head coach, Bill O’Brien, will make his debut as offensive coordinator with sophomore Bryce Young, under center for his squad.

On the other hand, the Hurricanes enter Saturday’s matchup still searching for that “big win” last year’s team failed to pick up – considering their quarterback, D’Eriq King, ended up tearing his ACL during Miami’s narrow loss in the Cheez-Itz Bowl (37-34), leaving them feeling somewhat “empty-handed” after posting an impressive 7-2 record in the ACC last season.

I’ll take the under here, as Alabama still possesses all the necessary tools to win Saturday’s matchup handily – but I expect Miami to come out of the gates with a ton of energy on defense, and for the Tide to emerge victorious by adequately suppressing the playmaking ability of King. 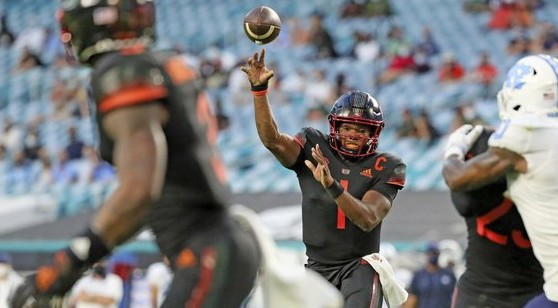 The Alabama Crimson Tide have gone OVER the point total in four of its last five games when facing a school from Florida. (AP)

After tearing his ACL during last December’s Cheez-Itz Bowl, King’s status for Miami’s heavily anticipated Week 1 matchup against Alabama stood unclear for most of the offseason – before finally receiving the green-light to fully participate in the early stages of camp.

The question is, “how much does it matter against the almighty Crimson Tide?” – considering Alabama heads into Saturday’s event returning a significant portion of last year’s remarkable defensive unit (19.4 PPG), which includes its second-leading tackler, Christian Harris (52 TKL).

King’s adamant availability ahead of Saturday’s matchup is excellent news for Miami’s immediate future – as I imagine the Canes would elect to play it safe with their superstar quarterback here if there was a significant chance of re-injury.

Unfortunately, even if King is at full-strength for his grand return against the Tide – it’s incredibly difficult for anybody to walk in and face Alabama’s defense in Week 1, especially a quarterback coming off a significant knee injury.

If Miami musters together a competitive offensive effort throughout Saturday’s contest, under-bettors could wind up in some trouble here (OU 61.5) – but my gut tells me that both offenses will start off slow in this one, and Alabama will ultimately run away with a win behind some gutsy, late-game defense.