The 2021 Egg Bowl might be one of the most exciting editions of the Magnolia State rivalry in recent years.

Both the Ole Miss Rebels and the Mississippi State Bulldogs are ranked in the Top 25, and these offenses are exciting with Lane Kiffin and Mike Leach at the coaching helms.

This has been an entertaining rivalry game over the last three decades as it has been very even with neither school winning more than three straight times.

Bet in Louisiana
Bet in Tennessee
Other Betting States

Quarterback Matt Corral was one of the Heisman Trophy contenders for most of the season. Corral has been banged up and is not at 100% though, leading to a decrease in his production. The only SEC team that Corral has thrown for over 300 yards against is Vanderbilt, and he hasn’t been as effective as a runner since torching Tennessee for 195 yards in mid-October.

Dontario Drummond has been the Rebels’ most reliable receiver this year with 53 receptions for 786 yards and eight touchdowns. Braylon Sanders is a formidable deep threat with his size and speed, and Jonathan Mingo made his long-awaited return from a foot injury last week.

The Rebels are averaging 5.2 YPC, and they have run the football very well this season. Ole Miss ranks 11th in rushing offense (220.6 YPG) as Jerrion Ealy, Snoop Conner, and Henry Parrish Jr. are all averaging at least 5.2 YPC themselves. That has helped this offense rank 6th in SP+.

This defense has done well enough to put Ole Miss on the cusp of a 10-win season. The Rebels rank 47th in Defensive SP+, and the Bulldogs probably won’t be able to punish them on the ground like other teams have this year.

QB Will Rogers has thrived in Leach’s offense this season. Rogers is the second-leading passer in college football behind Western Kentucky’s Bailey Zappe. He is completing 76% of his passes for 7.2 YPA with 34 touchdowns and eight interceptions. Rogers has been effective at the short underneath passes that define the Air Raid, and this offense has put up big numbers since the loss to Alabama.

The top receiver is Makai Polk, but there are five players that may end the season with over 500 receiving yards. Jaden Walley, Austin Williams, and Malik Heath are all used in similar ways, while Jo’Quavious Marks has 73 receptions out of the backfield. Fellow running back Dillon Johnson has 53 receptions as Mississippi State often uses passes in lieu of a ground game.

Mississippi State has struggled in the kicking game. Nolan McCord and Brandon Ruiz are perfect on extra points and a combined 10 for 12 inside of 40 yards on field goal attempts, but things get hairy from longer than 40 yards. They have combined to go 2 of 9 from that distance.

The Bulldogs have been much better than expected on defense. Mississippi State ranks 25th in total defense (338.2 YPG). They are well-rounded with the 26th ranked offense and the 27th ranked defense per SP+, and the front seven has done a good job of stuffing the run. 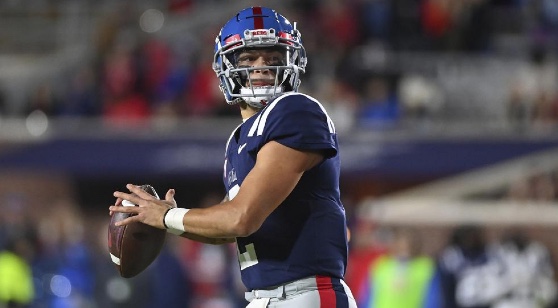 Inside the Stats - Ole Miss Rebels

Inside the Stats - Mississippi State Bulldogs

A fully healthy Corral might be able to outscore Mississippi State in a shootout, but he is not the same quarterback we saw earlier in the season. Rogers has been superb, and the home atmosphere will help the Bulldogs take the Egg Bowl.