The last game of Week 1 of the college football season will take place on Labor Day. The Georgia Tech Yellow Jackets and Clemson Tigers will meet in Atlanta, Georgia, but this is going to be a neutral site game. Since it will take place in Mercedes-Benz Stadium, Clemson will have more than its fair share of supporters in attendance.

At this point, the only side to back is Georgia Tech. Clemson opened as a 19-point favorite by the college football betting odds, but the Tigers have ballooned to 23.5-point favorites. That’s a little too much love given what we saw from the Clemson offense in 2021, as the Tigers’ biggest win against an ACC foe last year came by just 21 points.

If D.J. Uiagalelei can even be an above average quarterback, Clemson will likely make the College Football Playoff. Uiagalelei was mentioned in the same breath as Bryce Young and C.J. Stroud prior to last season, but he massively underwhelmed. The first-year quarterback completed just 55.6% of his passes for 6.0 YPA with nine touchdowns and 10 interceptions. Still, Clemson managed to go 10-3, but Dabo Swinney could pull the plug if Uiagalelei struggles again with highly touted freshman Cade Klubnik waiting in the wings.

Will Shipley should be able to have a lot of success on the ground. Shipley took over as Clemson’s top running back midway through last year, and he ended the season as the Tigers’ leading rusher with 739 yards (6.0 YPC) and 11 touchdowns. Clemson returns four starters along the offensive line including star left tackle Jordan McFadden, and the Tigers should be able to create some big holes in this game.

There wasn’t a standout receiver for Clemson last season. Uiagalelei spread the ball out pretty evenly, and the Tigers return all their top receivers save Justyn Ross. The passing game is the big question mark for Clemson this year, so it will be interesting to see how they fare in Week 1.

Clemson lost long-time defensive coordinator Brent Venables, and there are some concerns in the back seven. However, this defensive line should be one of the best in the country led by Bryan Bresee and Myles Murphy. Bresee and Murphy were the leading defensive vote getters on the Preseason All-ACC Team, and both players could be All-Americans.

Jeff Sims is going to be Georgia Tech’s starting quarterback for the third straight season. Sims won the job as a true freshman in 2020, and he showed improvement last year in completing over 60% of his passes for 7.8 YPA while cutting down on his interceptions. His mobility makes him a dangerous option, as he ran for 372 yards and averaged 5.3 YPC in 2021.

The loss of Jahmyr Gibbs is a tough one for Georgia Tech. Gibbs is now a Heisman Trophy contender with Alabama, while the Yellow Jackets are going to make do with Dontae Smith and transfers Hassan Hall and Dylan McDuffie. No one in that trio is as explosive as Gibbs, and they will have a hard time running behind an offensive line that is projected to have five underclassmen starting up front.

Malachi Carter is the only real option on the perimeter for Georgia Tech, and he led the Yellow Jackets in receiving yards last year. Syracuse transfer Luke Benson could immediately see a lot of action as the projected No. 1 tight end.

Georgia Tech only returns three starters on defense from last year. The defensive line is a major concern, as there isn’t a lot of talent or depth up front. Charlie Thomas is the leader of the defense from his linebacker position, and the other two players to watch are Ayinde Eley and Zamari Walton. 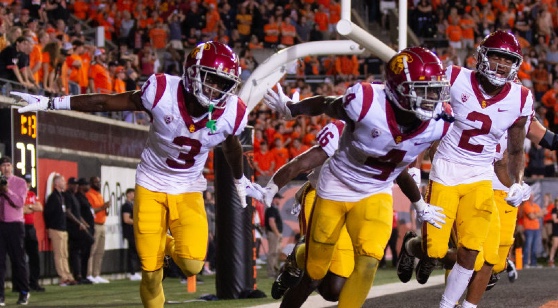