Considering the fact that Mike Trout has won three American League Most Valuable Player Awards as a member of the Los Angeles Angels, including last year, it is no surprise that he is a prohibitive favorite to do it again for 2020. Add to the fact that Joe Maddon’s arrival as Halos manager, combined with the uncertain status of their AL West rival Houston Astros, there are sizable gambling expectations of a big year at the Big A.

Of course, it’s also no surprise that Aaron Judge and Gleyber Torres of the Yankees are also top tier chalks for AL MVP. Shohei Ohtani is also riding the Angels wave while Houston’s Alex Bregman may be an under the radar quality pick. Francisco Lindor could spark a comeback season in Cleveland, but Matt Chapman of the A’s may prove to be the ultimate hidden gem. 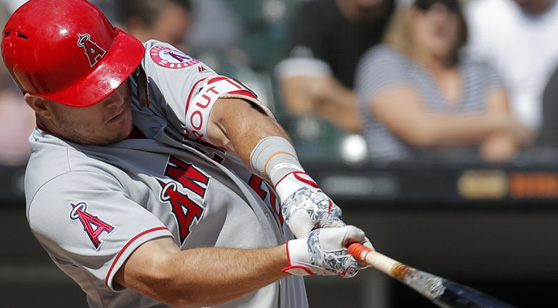 Mike Trout of the Los Angeles Angels is widely considered the best player in baseball and is always a MVP contender. (AP)

Mookie Betts could certainly win the 2020 NL MVP Award but he is overpriced. There has long been plenty of Dodgers public wagering money in Vegas that often drives LA’s value into the ground.

Meanwhile Ronald Acuna Jr. has emerged as one of the National League’s rising superstars with considerable upside and Christian Yelich is fresh on everyone’s mind as 2018 NL MVP. So too is last year’s winner Cody Bellinger, also of the Dodgers.

Bryce Harper has seen quite a drop after serving as the public sugar rush bet for this award one year ago.

The arrival of Mookie Betts to the Los Angeles Dodgers has served to add to the already hefty price tag for anything connected to this most public of MLB franchises. The Dodgers have won seven consecutive NL West Division titles and have played in two of the last three World Series.

LA won 104 games in 2017 and 106 in 2019. They were already heavy co-favorites with the New York Yankees to win the 2020 Fall Classic before Betts arrived via a trade with Boston, which only adds to the hysteria. In fact, he quickly emerged as the favorite to win the 2020 NL MVP Award. However better values are likely to be found elsewhere.

As is usually the case the betting line is set based off the combination of last year’s results along with preseason projections that are largely based on that. Mike Trout epitomizes that phenomenon. While Trout is still a bona fide threat for his fourth AL MVP award, he offers no betting value at all especially compared to other top candidates.

One factor in Trout’s favor is the likelihood of an Angels renaissance in the American League West. If LA contends or wins the division and Trout maintains current production he will certainly be in the conversation.

Yes, Judge was the winner of the 2017 AL Rookie of the Year award and the New York Yankees are big favorites to win it all, but he wasn’t able to complete a full season in the two years that followed. The right fielder has some things yet to prove relative to his expensive price tag.

The Yankee shortstop has been named an AL All-Star in back to back seasons and produced impressive 2019 numbers of 96 runs, 26 doubles, 38 home runs, 90 runs batted in, .535 slugging percentage and .871 OPS. In just his third season he figures to bring more upside.

The Angels DH was 2018 AL Rookie of the Year but dipped a bit in 2019. Still he could be a key component for the Angels if they are to have the big year. Ohtani is slated to hit in the third position but lacks the numbers that other big-time candidates bring to the board.

For handicappers thinking that the Cleveland Indians can bounce back after missing the playoffs last year shortstop Francisco Lindor could be worth serious consideration. Lindor has been named an AL All-Star for the last four seasons and has two Gold Gloves, including from 2019. He also posted impressive numbers of 101 runs, 40 doubles, 32 home runs, 74 runs batted in, .284 average, .518 slugging percentage, and .854 OPS last year.

When you get past all of the moralizing and virtue signaling pontification about the Astros, the fact remains that they have the best material in the AL West and Alex Bregman headlines it all. The Houston third baseman is coming off consecutive AL All-Star campaigns. Last year Bregman totaled 122 runs, 37 doubles, 41 home runs, 112 runs batted in, .296 average, .527 slugging percentage and 1.015 OPS.

A’s third baseman Matt Chapman is where those wanting a great price combined with proven ability may end up. Oakland is coming off consecutive wild card berths and could well win the AL West if Houston indeed slips. Chapman is a 2019 All-Star that has won back to back Gold Gloves. Last year he totaled 102 runs, 36 doubles, 36 home runs, 91 runs batted in, .506 slugging percentage and .848 OPS. At age 26 and entering his fourth season the best may yet be to come.

First, it must be remembered that Betts won the 2018 American League MVP award with the Boston Red Sox and is a legitimate, though very expensive, favorite. Also factoring into the equation is that last year Betts had a significant drop in production from 2018, which was far and away a career season for him. Add in a new league and division of pitchers for Betts to learn, and a repeat of 2018 is doubtful.

Part of being an MVP is the effect a player has on his team. And it’s hard to conceive of a more valuable asset than Christian Yelich of the Milwaukee Brewers. Yelich is coming off back-to-back All-Star seasons and hit a career high 44 home runs despite missing 32 games in 2019.

Bargain hunters looking for a sleeper may consider Tatis. The 22-year-old immediately garnered attention with the San Diego Padres as he scored 61 runs with 22 home runs and 53 runs batted in while playing in just 84 games as a rookie shortstop. This is an obvious bet the come play on an unproven but prosing player that plays for a perpetual losing franchise.

Albert Pujols was the last man to repeat as NL MVP in 2009 so Bellinger is already facing long odds. He is also carrying the high price tag of being 2019 NL MVP and playing for the Dodgers. Last year Bellinger exploded for far and away his best year. Regression is a reasonable possibility.

In just his first full season as a regular for the Washington Nationals Soto rode the wave to the Nats surprise World Series championship with very good, but hardly MVP type numbers.

Arenado is another sleeper with five consecutive years as a National League All-Star and seven straight Gold Gloves. Further, Arenado is coming off a stellar season of 102 runs, 31 doubles, 41 home runs, 118 runs batted in, .315 average, .583 slugging percentage and .962 OPS. Counter to that is the fact of playing third base for a dreadful team, which hurts the MVP cause.

On the positive Harper is a classic beaten favorite that fell far short of expectations last year. However, the Phillies are not a top pick for a playoff spot and Harper is coming off an inconsistent 2019 campaign.

When considering all that goes into the MVP award and the price tag on each player Matt Chapman makes the most sense. 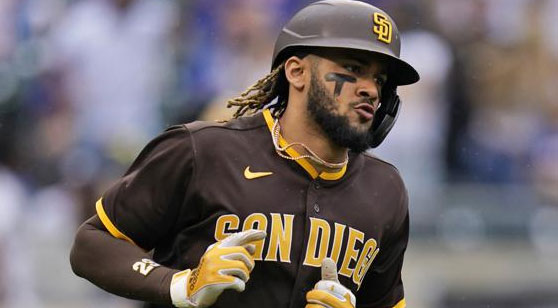