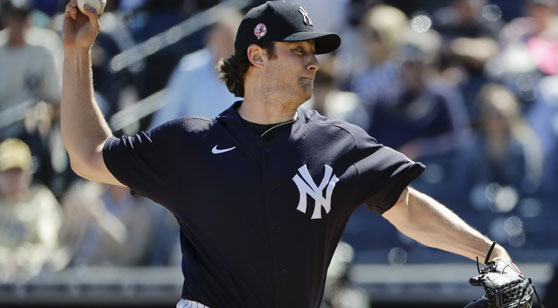 The 2020 MLB season gets under way with Gerrit Cole and the New York Yankees vs. the Washington Nationals

Major League Baseball is finally going to start this year on Thursday night with two nationally televised games on ESPN.

Shortly after, we'll be treated with a National League West rivalry between the Los Angeles Dodgers and the San Francisco Giants at 10:00 p.m. ET.

This pair of matchups will be the first of 900 expected games to be played in the shortened 60-game season where the baseball betting will surely heat up the sportsbooks.

For Thursday night’s dinnertime special the defending World Series champion Washington Nationals host the defending AL East champion New York Yankees. The line and total for this game was set weeks ago and baseball bettors like me have been salivating over this matchup ever since then.

Pitching for the Yankees is their big free agent acquisition Gerrit Cole. Opposing Cole is Nationals Starting Pitcher and three-time Cy Young award winner Max Scherzer. Between both Cole and Scherzer, both pitchers make more per season combined than the entire annual budgets of five countries. In this pitcher duel, I am going with Cole and the Yankees to win outright as -135 moneyline favorites.

While my model projects Scherzer to average 5.9 innings per start this season, Cole is projected to average 6.7 innings per start. While it is important to note that teams may not pitch their starters as many innings at the start of the season due to the expanded rosters, both of these teams are not paying these players the money they are paying them to pitch only five innings and call it a day.

In addition to Cole being an innings eater, my model projects the Yankees to have the best bullpen in Major League Baseball this season. In contrast to the Yankees, my model predicts that the Nationals will have an average bullpen this season. When you consider that this game is going to come down to pitching, it is hard to imagine how the Yankees cannot win when they have the best starting and relief pitching for Thursday night’s matchup.

Along with having better pitching for Thursday night’s matchup, the Yankees also have better hitting. Among all 30 MLB teams this season, my model projects the Yankees to score the 4th most runs in the league and the Nationals to score the 15th most. The Yankees lineup is like the Croton Dam in that it is a dam with very few cracks. Only OF Brett Gardner and 3B Gio Urshela are projected to have average offensive performances this season.

The Nationals on the other hand while returning Juan Soto have four players who are expected to have below average offensive production. For the Nationals to win games this season, it has to be through pitching. Unfortunately for the Nationals, their pitching staff is outmatched by the Yankees for Thursday night’s game which is why I am betting on the Yankees moneyline at -135 odds.

For those of us located on the East Coast, the West Coast baseball nighttime games are like a midnight snack of baseball. But instead of stuffing our stomachs with White Castle sliders, we stuff our eyes with Clayton Kershaw sliders. For my MLB midnight snack of the night for Thursday’s opening night double-header, I am betting on the San Francisco Giants to score more than 2.5 runs against Clayton Kershaw and the Los Angeles Dodgers.

This is a contrarian play to say the least as Kershaw is one of the best pitchers in baseball, and the San Francisco Giants are one of the worst offensive teams in baseball. However, despite the disparity of talent between the Dodgers and Giants, much needs to go right in Thursday night’s game for the Dodgers to hold the Giants to 2 runs or fewer. That is why I am betting on the Giants scoring more than 2.5 runs at -115 juice.

The main factor that is going to decide if the Giants are going to score more than 2.5 runs is how the Dodgers use their ace. Kershaw is one of the best pitchers in baseball as he has one of the lowest career ERA’s (2.44), and WHIP (1.01) of the live baseball era. Whenever Kershaw starts a game particularly against any team in baseball let alone of the worst teams in baseball, the Dodgers are huge moneyline favorites. The betting public knows that Kershaw is legit, and the sportsbooks as a result will set the team run total too low on Kershaw’s opponents.

In 2019, Clayton Kershaw had 29 regular season and post season starts. In those 29 starts, the opposing team scored at least three runs 69% of the time.

Additionally, if the Dodgers hammer Giants starting pitcher Johnny Cueto early in the game, there is a chance that the Dodgers take Kershaw out of the game early and replace him with one of their weaker relievers. That is why I recommend going against the conventional wisdom by betting that the San Francisco Giants will score more than 2.5 runs at -115 juice.

My MLB handicapping model is based on the baseball pythagorean theorem where you can predict a team's winning percentage based on how many runs they score and allow over the course of the season.

I make projections on how many runs each player scores or allows for how that team's projected roster for that day would do over the course of a full season.

Once I have a projected winning percentage for both teams, I have a formula I use to determine each team's probability of winning. For example I calculate what percentage of games a .500 team wins against a .400 win team.