Both these lineups are healthy right now as they meet for the first time since 2019. Houston's offense has picked things up lately by scoring at least four runs in seven of the last 11 games, while New York is turning the corner following a poor start.

Two solid pitchers take the mound tonight in Zack Greinke and Domingo German, but don't expect a pitcher's duel in the Bronx for Game 1 of this key series. 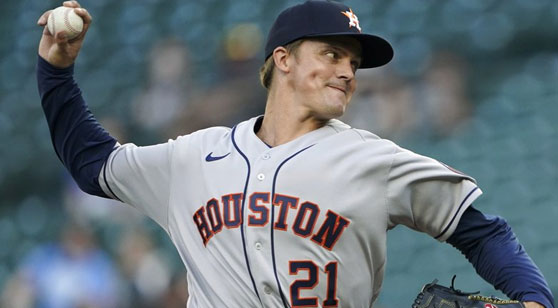 Zack Greinke takes the mound on Tuesday night as the Astros visit the Yankees in the Bronx. (AP)

The Astros begin Tuesday's play tied with the Mariners for second place in the American League West. Houston owns a 15-13 record overall and an 8-6 mark away from Minute Maid Park.

The Astros continue a six-game road trip after taking two of three games at Tampa Bay this past weekend, although Houston lost the series finale on Sunday, 5-4.

The Yankees reached the .500 mark after a 5-10 start to the season to sit at 14-14 heading into Tuesday, as New York sits 2.5 games behind Boston for first place in the American League East.

New York pulled off a three-game home sweep of Detroit this past weekend, as the Bronx Bombers have won five of their previous six contests.

These teams have turned into playoff rivals over the last few years by meeting in the postseason three times since 2015. In all three instances, the Astros eliminated the Yankees from the playoffs, including beating New York in six games of the 2019 American League Championship Series.

Houston and New York didn't hook up in last season's abbreviated campaign, but the Astros took eight of 13 meetings back in 2019. New York won four of seven matchups at Yankee Stadium, although two of those defeats came in the ALCS.

With Justin Verlander sidelined for the season, Greinke has become the ace of this Astros' staff. The former Cy Young winner has posted two shaky starts in which he allowed at least four earned runs, including in his last outing against Seattle.

However, the Astros are 5-1 in Greinke's six starts this season, including a pair of road victories over the Angels and Mariners in which both games easily finished 'under' the total.

German struggled in his first two starts of the season as the right-hander tossed only seven innings total in losses to the Blue Jays and Rays. But he has bounced back of late by beating the Indians and Orioles, while tossing seven scoreless innings in a 7-0 triumph at Baltimore his last time out.