Anytime Jacob deGrom takes the mound for the Mets, it's a good bet it will be a low-scoring affair for two reasons.

First, deGrom remains one of the elite pitchers in baseball, but New York's lineup doesn't exactly provide him with a lot of run support.

Max Fried is a solid young pitcher for Atlanta and should be able to keep New York's decimated lineup at bay and keep this a low-scoring contest. 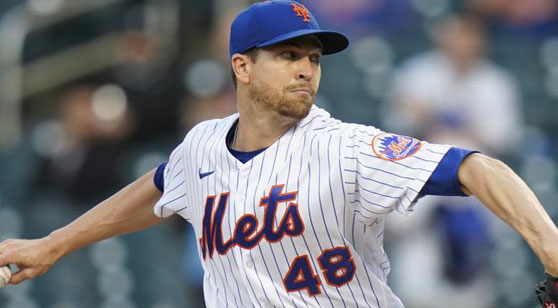 The Mets have won four straight games after routing the Braves last night, 13-2 as a +130 home underdog.

New York remains atop the National League East race at 25-20, while improving to an impressive 15-5 mark at Citi Field.

Atlanta is tied for second in the division with Philadelphia heading into Sunday's action after dropping their second straight game.

The Mets have won three of four matchups with the Braves this season, as Atlanta has been held to three runs or less in the three losses.

The southpaw hasn't seen the same success as the 2020 campaign, as Fried finished with a perfect 7-0 record and 2.25 ERA.

Fried shut down the Pirates in his last start by tossing seven innings and allowing four hits in a 7-1 rout as a -210 favorite.

The Braves are 2-0 in Fried's two road starts this season, but he lost to the Mets the last time he faced them on May 17 in a 3-1 setback in spite of striking out eight batters in six innings of work.

You'll need a magnifying glass to look at deGrom's ERA through seven starts, as the two-time Cy Young winner hasn't allowed more than one earned run in any appearance this season.

In spite of low totals in each of deGrom's trips to the mound, the 'unders' continue to cash with the Mets going 5-0-1 to the 'under' in his past six starts, while New York is 4-1 in his previous five outings.