St. Louis has struggled on the road recently, while scoring only one run in the first two losses in Atlanta.

The teams play a double-header on Sunday in Atlanta and with Kwang-hyun Kim looking to capitalize off a good start, the Cardinals' southpaw will try to slow down the tough Braves' lineup. 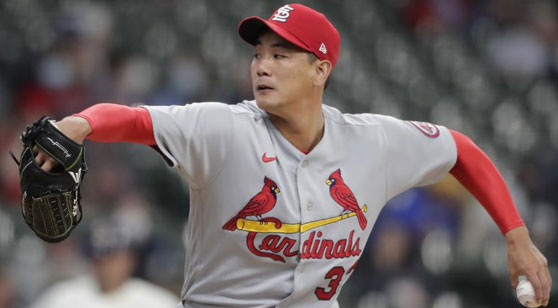 Kwang-hyun Kim seeks his first win since April 23 as he takes the mound tonight against the Braves. (AP)

The Cardinals and Braves were rained out on Saturday as the two teams will play a double-header on Sunday.

St. Louis enters the day with a .500 mark at 35-35 as the Cards sit 3.5 games behind both the Brewers and Cubs for first place in the National League Central.

Atlanta sits in the middle of the National League East at 32-35, while owning a 19-19 mark at Truist Park this season.

This series has been all Braves so far as Atlanta captured the first two games in blowout fashion.

In Thursday's series opener, the Braves blanked the Cardinals, 4-0 as -180 favorites, led by Charlie Morton's seven strikeouts in 7.2 scoreless innings on the mound.

Atlanta defeated St. Louis again on Friday night, 9-1, as the Braves grabbed a 5-1 advantage after two innings. The game barely finished 'over' the total of 9.5 runs, snapping a five-game 'under' streak.

The Cardinals won each of Kim's first five starts of the season, but St. Louis is 1-4 in the southpaw's past five outings.

Kim got back on track in his last trip to the mound by yielding one earned run in six innings of a 2-1 win against the Marlins on June 15.

Smyly is coming off his first win in nearly a month in his previous outing, a 6-4 victory at Miami. The southpaw struck out six batters in five innings of work, while allowing two earned runs or less in five of the past seven starts.

The 'over' has cashed in three of Smyly's four home starts this season, while giving up 16 earned runs in 19.1 innings pitched at Truist Park.

Cole Takes the Hill In Toronto