There aren't a lot of redeeming qualities to the Diamondbacks now, who have won eight games in the last two months.

Anthony DeSclafani is putting together a career season for San Francisco, which includes a 2.15 road ERA.

Arizona has done a better job scoring runs during this series by putting up 14 in three games, but it's hard to make a case for them against this strong San Francisco squad. 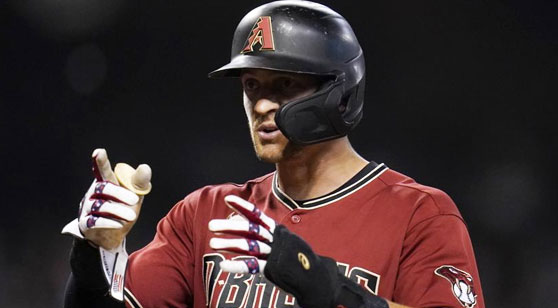 The Diamondbacks seek a four-game split with the Giants on Sunday night at home. (AP)

The Giants remain in first place of the National League West in spite of the World Champion Dodgers breathing down their necks.

San Francisco enters Sunday's action at 52-30, owning a half-game edge over Los Angeles in the division, while the Giants own an impressive 26-19 road mark.

Arizona has free-fallen over the last two months as the D-backs sit in last place of the NL West at 23-62. Since starting the season at 15-13, Arizona has posted a dreadful 8-49 the last 57 games, which included losing streaks of 13 and 17 during this span.

The D-backs surprised the Giants in the opener of their four-game set at Chase Field, 5-3 on Thursday night behind seven strong innings from right-hander Merrill Kelly.

San Francisco has captured the last two meetings, starting with Friday's 11-4 blowout as -145 favorites. The Giants hit three homers in the win, including a grand slam by Thairo Estrada, who was making his first start for San Francisco.

In Saturday's 6-5 win, Austin Slater hit the go-ahead home run for San Francisco in the eighth inning, marking the eighth victory in nine matchups this season for the Giants over the Diamondbacks.

DeSclafani is coming off his first loss in over a month as the right-hander allowed three earned runs in five innings of a 3-2 defeat at the Dodgers.

The former Reds' hurler is unbeaten in his last five road starts, which includes consecutive scoreless outings in wins over the Angels and Nationals.

DeSclafani limited the D-backs to five hits and two runs in five innings of a 13-7 home victory as a -175 favorite on June 16.

Smith is winless in his previous five starts, but hasn't pitched poorly in this stretch. The southpaw has allowed two earned runs or less four times during this span, but the D-backs have scored a total four runs in his last three starts.

Arizona is riding a 4-1 'under' run when Smith takes the mound, while the left-hander has struck out 33 batters during this run.