We have yet to hear who will take the mound for either the Milwaukee Brewers or the Atlanta Braves in Game 4 of their series on Tuesday.

Milwaukee manager Craig Counsell told the media that Game 1 starter Corbin Burnes is not an option on short rest though, while Braves beat writer Mark Bowman tweeted that the two most likely starters for Atlanta are Charlie Morton or reliever A.J. Minter.

This has been the lowest scoring divisional series in baseball history through the first three games. There has been a total of three runs scored in all three games, and the Brewers haven’t had a player cross the plate since Game 1. The Under is the obvious best bet, and there is value in backing the Brew Crew too. 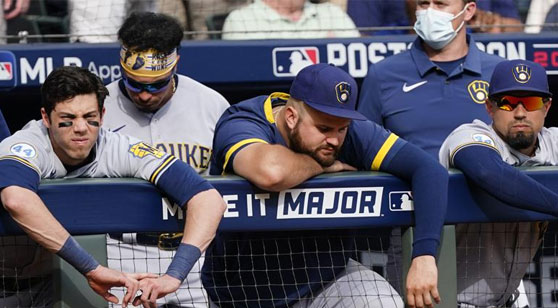 The Brewers' bats have gone cold the last two games by getting shutout by the Braves. (AP)

With Counsell unwilling to pitch Burnes on short rest, Milwaukee is likely to start Eric Lauer on Tuesday. Lauer has yet to take the mound in this series, while fellow starter Adrian Houser threw in both Game 1 and Game 3.

Lauer would have been an ace on several teams given his performance this season. He went 7-5 with a 1.14 WHIP and a 3.19 ERA through 118.2 innings for the Brewers. Although he was rocked by the Los Angeles Dodgers in his last start on October 1, he was lights out in September with a 1.15 ERA in 31.1 innings.

The problem hasn’t been the pitching though. Milwaukee’s bats have gone ice cold in this series, and Willy Adames has been the only solid performer. Adames has four hits and six strikeouts against Atlanta, making him very hit or miss.

Avisail Garcia has not had a good series. While you can say that about almost any Milwaukee hitter, Garcia has been one of the worst since he is 1-11 with seven strikeouts. He was the most reliable bat for the Brewers in the regular season, so his performance has been especially disappointing.

Someone will get going for Milwaukee in Game 4. The Brewers have some decent bats like Kolten Wong, Eduardo Escobar, and Luis Urias in addition to Adames and Garcia, so they should break out of their slump.

Atlanta has a few different options for who to start on Tuesday afternoon. The Braves could go with Morton, Minter, Huascar Ynoa, or Drew Smyly. Ynoa or Smyly were starters for the Braves in the regular season, and they have yet to take the mound in this series.

Joc Pederson has just three at-bats for the Braves in the postseason, but he has made those opportunities count. He came off the bench to hit a home run in Game 1, picked up a base knock in Game 2, and Pederson provided Atlanta with its only three runs in Game 3 off another pinch-hit long ball.

Among the everyday players, Austin Riley has been the top performer for the Braves’ hitters. Riley has four hits for Atlanta in this series, and he blasted a home run in Game 2.

Catcher Travis d’Arnaud scored his first base hit of the series on Monday, but it hasn’t been a great series for him. He struck out a ton in his first two games and left five runners on base yesterday.

Some of the Braves biggest bats have struggled to come up for the team too. Ozzie Albies and Freddie Freeman are both struggling, and Jorge Soler hasn’t had much success either.