Game 5 of the NLDS sees the San Francisco Giants host the Los Angeles Dodgers as winner takes all and faces the Atlanta Braves in the NLCS. Opening pitch is set for 9:07 p.m. ET and will air on TBS from Oracle Park in San Francisco, California.

The only Divisional Series that will go the distance pits the two best teams in MLB against one another on Thursday night. The San Francisco Giants and Los Angeles Dodgers will play a winner-take-all Game 5 to see who will advance to face the Atlanta Braves in the NLCS. The winner will be the favorite to win the World Series, while the loser will have a 100-win season be for not.

Logan Webb was great against the Dodgers in Game 1. Webb didn’t allow a run in 7.2 innings of work, leading the Giants to a comfortable 4-0 win. He struck out 10 batters and allowed just five hits, getting San Francisco off on the right foot in this series. San Francisco will give him the ball again in Game 5, and Webb will deliver to send the Giants to the NLCS. 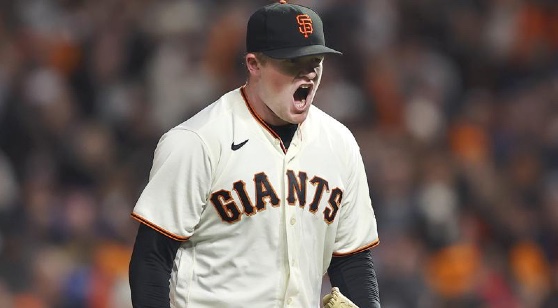 Logan Webb starts Game 5 for the Giants, pitching 7.2 scoreless innings with 10 K's against the Dodgers in Game 1. (AP)

Webb has been solid against the Los Angeles Dodgers all season. The Giants won all three of his starts against their rival in the regular season, posting a 2.25 ERA in 16 innings of work. He struck out 17 batters, and the Dodgers hit just .127 against him.

San Francisco had the best bullpen in the majors in the regular season. The Giants’ relievers had a cumulative 2.99 ERA and a 1.13 WHIP, and they will all be ready to go after a day of rest.

Kris Bryant has been great for the Giants this postseason. He has six hits through four games, leading the team in that department. Bryant was a bit underwhelming for San Francisco in the regular season, but he has delivered to this point in the playoffs. The veteran slugger has struggled against southpaws since being traded from Chicago though with a .581 OPS against lefties.

The Giants have not been great against left-handed pitchers this season, but they have a few veterans that could be primed for a hit or two against Julio Urias on Thursday night. Buster Posey has been great the whole season and had three hits in Urias’ previous start in Game 2, and Brandon Crawford and Austin Slater have come up big in this series.

Urias pitched a quality five innings against the Giants on Saturday. He allowed just four base runners and struck out five San Francisco batters in the Dodgers’ 9-2 win.

Urias was the only 20-game winner in the majors this season. In the regular season, he started five games against the Giants, posting a 3.38 ERA in 29.1 innings of work. However, San Francisco hitters batted .274 against him, so he could get into trouble in Game 5.

Los Angeles will look for Mookie Betts and Will Smith to lead this offense. Both Betts and Smith had two hits in Webb’s previous start, and they combined for all but one of the Dodgers’ baserunners in that loss. Betts has seven hits and is hitting .350 this postseason, while Smith leads the team with a 1.21 OPS.

Cody Bellinger has had a nice run in the playoffs after a dismal regular season, but Trea Turner and Justin Turner are both struggling. Trea is batting .227 and has yet to steal a base, and Justin has just two hits in 21 at-bats.

The Dodgers had the second-best bullpen in baseball during the regular season, but it wasn’t as good as the Giants. We have seen Joe Kelly look shaky, and Brusdar Graterol could implode at any time.