The NL Champion Atlanta Braves will head to Texas to take on the AL Champion Houston Astros in Game 2 of the World Series after winning the first game. Opening pitch is set for 8:08 p.m. ET and will air on FOX from Minute Maid Park in Houston, Texas.

Charlie Morton didn’t get the win on Tuesday night, but the veteran pitcher showed a lot of grit. Morton suffered a broken fibula in the second inning, but he managed to face three more batters before coming out of the game.

A.J. Minter came in to get the win in a 6-2 victory for Atlanta. Now, the Braves have ace Max Fried on the mound in Game 2 and can take a commanding lead in Houston.

Fried was rocked by the Los Angeles Dodgers in his last start, but he will bounce back with a strong performance in Game 2 against the Astros. He was Atlanta’s best pitcher all season, and he will be able to outduel Jose Urquidy to help the Braves take a 2-0 lead in the World Series. 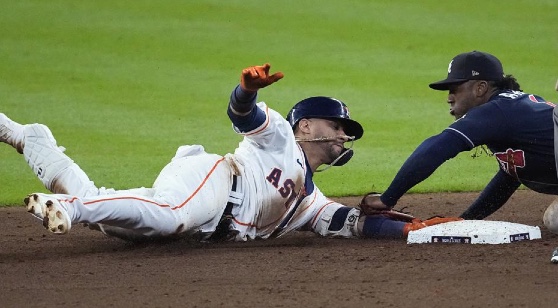 The Houston Astros have gone OVER the run total in eight of their last 10 games. (AP) 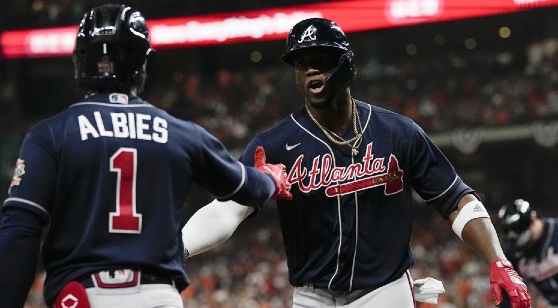 The Atlanta Braves have won six of their last eight games as underdogs. (AP)

Jorge Soler got the Braves off to a great start in Game 1. Soler became the first person in World Series history to lead off the first game of the series with a home run, sending a ball 382 feet into left field. It was certainly cathartic for Soler too, as it was his first home run of the postseason and put an end to his recent struggles at the plate.

After some big hits in the NLDS against Milwaukee, Adam Duvall went cold against the Dodgers. He had four hits in six games during the NLCS, but he also hit a home run to put Atlanta up 5-0 in the third inning last night. That put his OPS over .700 again for the postseason, and he will look to carry that momentum into Game 2.

It wasn’t just Soler and Duvall that came through for the Braves though. Every Atlanta batter had at least one hit with Soler, Ozzie Albies, and Eddie Rosario all recording multiple hits.

Max Fried posted a 14-7 record with a 1.09 WHIP and a 3.04 ERA during the regular season. He gave up five earned runs and allowed 10 base runners in 4.2 innings against the Dodgers last Thursday, but he was electric in his two previous starts this postseason. Fried allowed just 11 hits and two earned runs and didn’t concede a walk over 12 innings while striking out 14 batters.

Jose Urquidy has made one previous appearance this postseason. It did not go well for the 26-year-old, as he allowed five earned runs and couldn’t get out of the second inning. Dusty Baker may not have as quick of a hook as he usually would though, as Framber Valdez’s rough outing in Game 1 led to the bullpen covering seven innings.

In the regular season, Urquidy was a solid performer for Houston. He posted an 8-3 record with a 0.99 WHIP and a 3.62 ERA. It appears Urquidy may have run out of gas though, as this was the first year of his career where he threw more than 100 innings.

ALCS MVP Yordan Alvarez continued to hit well for Houston. Alvarez got on base twice and is now carrying a .432 batting average and a 1.343 OPS into Game 2.

Both managers had to dip into their bullpens in the third inning in Game 1. That will put the onus on these starting pitchers to go into the fifth or sixth inning on Wednesday night, and that gives Atlanta a clear edge. The Braves have a much better starter in Fried and a more reliable bullpen.