It’s been a rough year for the Memphis Grizzlies. Justise Winslow and Jaren Jackson Jr. have yet to take the court this season, and the Grizzlies had to cancel a week’s worth of games in late January due to COVID.

Memphis has managed to stay in the playoff hunt despite these setbacks though, and they are right at .500 a few weeks before the NBA All-Star Break. However, the Grizzlies will have their work cut out for them on Friday when they take on the Los Angeles Lakers. 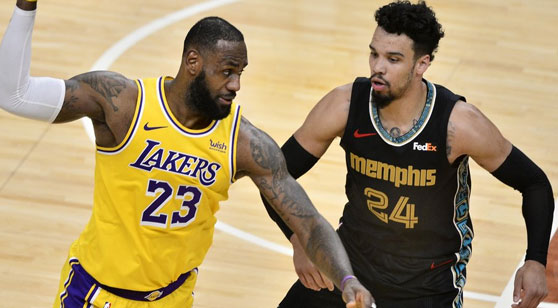 LeBron James and the Lakers defeated the Grizzlies twice in Memphis back in January. (AP)

This will be the third meeting between these two teams this season. The Lakers went on the road to beat the Grizzlies in back-to-back games in early January. Los Angeles held Memphis to just 94 points on 41.1 percent shooting (27.3 percent from three-point range) in the first game.

The second game was closer, but the Lakers were up by nine points with under 25 seconds left before the Grizzlies knocked down some threes to lose 94-92.

The Lakers are the defending champions and the team to beat this season. They are 20-6 coming into Friday night’s game with six straight victories to their credit. Those wins haven’t come easy though as the Lakers nipped Boston by a single point to start the streak, and they needed overtime to win their last three games.

LeBron James and Anthony Davis both needed to score 30 points in order for the Lakers to beat the lowly Detroit Pistons in double overtime on Saturday.

After a 2-6 start, Memphis won five straight games to get back over .500. The Grizzlies didn’t play for almost two weeks due to COVID, but they smashed San Antonio in two consecutive games to get to 9-6.

Unfortunately, injuries and fatigue caught up to them at this point, leading to four straight losses. Memphis’ closest defeat was by nine points as opponents scored at least 115 points on this defense in that stretch.

We saw the Grizzlies bounce back with a big win over Charlotte on Wednesday. Memphis set a franchise record with 23 three-pointers in the 130-114 win over the Hornets. Kyle Anderson, Dillon Brooks, Desmond Bane, and Grayson Allen all knocked down at least four threes on the night.

Between a sprained ankle and COVID, Ja Morant didn’t play for nearly a month. The 2020 NBA Rookie of the Year is back in action now though, and he leads the Grizzlies with 18.3 PPG and 7.7 APG. His shot still needs some time to get back up to standard though as he is making just 28.2 percent of his threes.

Jonas Valanciunas has 11 double-doubles in the 15 games he has played this season. He notched 27 points and 20 rebounds in a big effort against Toronto on Monday.

Valanciunas isn’t as effective at spreading the floor as most European big men, but he is knocking down 55.6 percent of his field goals.

Memphis gets to the free throw line less often than any other team in the league. The Grizzlies are largely young and don’t know how to finesse the same calls out of referees as veterans, depriving them of valuable opportunities. They do a good job of getting second chances though with 11.4 offensive rebounds a game (fourth in the NBA).

Davis has missed the Lakers’ last two games with a sore Achilles’ tendon. The big man was playing big minutes before the injury, so head coach Frank Vogel might take this as a sign to play his superstar a little less often. He is considered questionable to play tonight, and his absence has made things tougher for the Lakers this week. Davis is averaging 22.3 PPG and 8.6 RPG on the season.

James is banged up too. Last year’s NBA Finals MVP is considered probable to play on Friday though. He is currently the favorite to be named regular season MVP with 25.5 PPG, 7.9 RPG, and 7.9 APG.

James has really improved from beyond the arc, hitting 39.4 percent of his threes, but he has tried to force things a little too much this week with 17 turnovers in three games.

Montrezl Harrell allows Davis the freedom to play the perimeter and stretch the floor. The undersized center is thriving in this era of basketball, as he is able to bang on the boards despite being 6’7. His 2.3 offensive rebounds per night are some of the most in the league, and he has done a much better job of hitting his open shots and sinking free throws this season.

Davis’ availability will swing this line a couple points one way or the other, as we have seen James press a bit too much without his co-star. Still, the Lakers are the pick given Memphis’ injury woes.