Interconference NBA action will resume on Friday night with the Utah Jazz set to host the Milwaukee Bucks and VI is getting you ready with another slate of Best Bets and Game Previews to help handicap all the evening’s top matchups.

Utah heads into this contest as a 1.5-point favorite over Milwaukee, marking the first time all season that Bucks have opened as an ‘underdog’ in a matchup at most shops.

While the total for Friday night’s tilt currently sits at OU 232.5 – the highest ‘over-under’ set for a Jazz home-game since they hosted James Harden’s Rockets back in February 2020 (U 234.5). 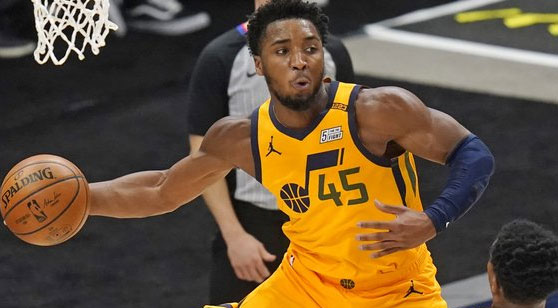 Donovan Mitchell and the Jazz have won 16 of their past 17 games and 10 straight at home. (AP)

The Jazz come into this matchup having won and covered the spread in five straight games, with their most recent defeat coming in an 11-point loss to the Nuggets back in January.

In Utah’s most recent affair, the Celtics stayed neck-and-neck with the Jazz for a good portion of the contest, but Joe Ingles and Donovan Mitchell closed out the night with 10 points apiece in the 4th quarter to secure a victory for Quin Snyder’s team.

While the Bucks just had a five-game winning streak SU and ATS snapped with a one-point loss to the Suns on Wednesday – as Giannis Antetokounmpo missed a game-winning shot from the top of the key with time expiring to solidify Milwaukee’s 12th loss of the season.

The Bucks and Jazz split a pair of closely contested games during last year’s regular season, with the Utah winning a low-scoring, defensive battle (103-100) and Milwaukee escaping with a 4-point victory in a 3-point shootout (122-118).

The most recent matchup between these teams occurred back in early January though, which resulted in a 13-point win for the Jazz behind 32 points on 12-24 from the field from Mitchell.

Khris Middleton and Antetokounmpo chipped in over 30 points apiece on a combined 56.8% from the field in Milwaukee’s matchup with Utah earlier this year, but a combined field goal percentage of 35.2% on 54 shot attempts from the Bucks' supporting cast was enough to negate their superstars outstanding performances in the loss.

After a bumpy 6-10 ATS start to this year’s regular season, the Bucks appear to finally be living up to their pre-season hype following the acquisition of Jrue Holiday – having won five of their last six games, now sitting just two games behind Philadelphia for the top spot in the Eastern Conference.

Utah heads into Thursday night’s matchup owning the best record in the NBA, having now won 16 of their last 17 games SU, with their only losses ATS across that stretch coming in a loss to the Nuggets and a 7-point win over Detroit.

The Jazz’ success so far this season has been mainly due to their ability to control both sides of the floor consistently – ranking 3rd in the NBA in both points allowed per game (105.8) and opponent field goal percentage (43.9%). While on the other side of the floor, still ranking 6th in the NBA in points scored per game (114.6) and 4th in effective field goal percentage (56.1%).

The Bucks have elected to protect Holiday’s medical privacy during his current absence, but after getting ruled out unexpectedly prior to Milwaukee’s win over the Nuggets on Monday and some comments made by Middleton regarding a positive COVID-19, it is safe to assume that the recently acquired point guard won’t see the floor against Utah this Friday night.

Middleton was tremendous in his first matchup with the Jazz this season, as the Texas A&M product managed to tie his season-high in scoring with 31 points on 11-19 from the field and 3-8 from three-point territory, despite his team losing the game by double-digits.

While Middleton wasn’t as efficient as he typically is from deep in his first matchup with Utah, he did jack up eight attempts from long-range in the contest, which is just one attempt short of his season-high in three-point tries.

I’ll back him to knock down three or more three-pointers again at plus odds here, as I anticipate that the Bucks will likely need to lean on their shooters slightly more than usual against the hottest team in the league.

The Jazz come into Friday’s contest boasting the best record in the NBA straight-up (20-5) and against the spread (18-7) – having won 16 of their last 17 games while failing to cover the spread in just one of those victories (DET +12.5).

Out of Utah’s 20 wins so far this season, only one of those victories was determined by a margin of two points or less (at OKC). I’ll back the Jazz to pick up their second win of the season against the Bucks on Friday after seeing Utah walk away with a convincing 13-point victory in their first matchup with Milwaukee.