Two of the most hyped teams coming into the 2020-21 NBA season were the Dallas Mavericks and New Orleans Pelicans. Dallas made it to the playoffs as a No. 7 seed thanks to the brilliant play of Luka Doncic last year, while New Orleans has a ton of young talent highlighted by Zion Williamson.

However, the Mavericks and Pelicans are both multiple games under .500 and would miss out on the playoffs if the season ended today. This will be the first meeting between these two teams this year as their game scheduled for January 11 was postponed due to COVID. 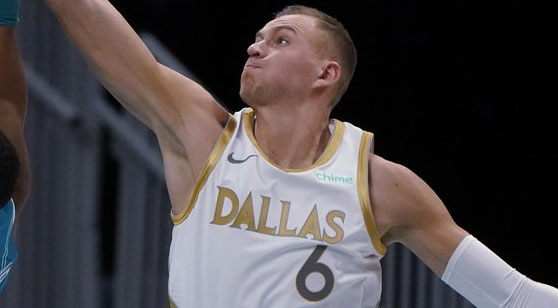 Kristaps Porzingis and the Mavericks look to improve on a 2-10 ATS record at home this season. (AP)

Dallas was sitting at 8-7 three weeks ago. Then, the Mavericks lost six straight games, falling to Houston and Denver before losing back-to-backs against both Utah and Phoenix.

Defense continued to be a major issue as the Mavericks allowed at least 109 points in all six losses. This team has now allowed a minimum of 109 points in 16 straight games dating back to January 13.

We have seen the offense overcome a subpar defense over the last week. The Mavericks have won four of their last five games, beating Atlanta twice, splitting with Golden State, and knocking off Minnesota. None of those wins were by more than six points, while the one loss was by a whopping 31 points.

The Mavericks edged the Hawks, 118-117 on Wednesday night. Doncic proved why he should have been drafted ahead of Trae Young by leading Dallas to the victory despite his team trailing by nine points entering the fourth quarter. The 2019 NBA Rookie of the Year finished the night with a triple-double with 28 points, 10 rebounds, and 10 assists.

New Orleans was reeling with eight losses in nine games during a three-week stretch in January. The Pelicans dropped to 5-10 before splitting their next four games to move to 7-12. Fortunately, they are now playing their best basketball of the season with four straight wins over Phoenix, Indiana, Memphis, and Houston before Wednesday night’s loss to Chicago.

It’s hard to take much from the Pelicans’ loss to the Bulls. This game was on the tail end of a back-to-back that saw New Orleans host Houston on Tuesday night before flying over 800 miles to Chicago for a game the next night.

The Pelicans didn’t have fresh legs, leading to the Bulls scoring 40 points in both the first and third quarter. Zach LaVine and Coby White combined to go 17 of 31 from beyond the arc and teamed up for 76 points.

Williamson is the most exciting prospect since LeBron James. He has yet to live up the billing, but the potential is there for all to see each night.

Brandon Ingram is just behind Williamson in terms of scoring. He is averaging 23.7 PPG, but he isn’t nearly as efficient. Ingram is making 46.9 percent of his field goals, yet he is also knocking down 39.3 percent of his treys to stretch the floor.

Lonzo Ball and Eric Bledsoe have done a decent job in the backcourt with Jrue Holiday now in Milwaukee.

Ball is knocking down 37.4 percent of his threes as the team’s third-leading scorer, while Bledsoe is hitting over 40 percent. Both players are averaging over 13 PPG, but they have not done a good job defending the perimeter.

Opponents are making 38 percent of their threes against the Pelicans. Teams are getting plenty of open looks, leading to New Orleans giving up almost 16 threes a night, placing the Pelicans dead last in this category.

Doncic is posting big numbers, but what else is new? He has a chance to average a triple-double (27.8 PPG, 8.7 RPG, and 9.3 APG) over the course of the season. That would make him just the third player in NBA history to accomplish that feat, joining Oscar Robertson and Russell Westbrook.

The Mavericks’ leader has tallied at least 25 points in 12 straight games. Doncic hasn’t been as efficient as Dallas would like, but he is the only reliable scoring option on this team. Jalen Brunson is the only Dallas player averaging more than 7.0 PPG that is making a greater percentage of his shots from the floor than Doncic.

Dallas needs more out of Kristaps Porzingis. The front office was hoping to have landed its second star when the Mavericks acquired him from the New York Knicks, but he has failed to reach his potential in the Lone Star State. Injuries have certainly hampered his development though.

Porzingis is averaging 19.7 PPG and 8.3 RPG. He has the potential to be a match-up nightmare, but he is making just 45.8 percent of his field goals and 32.6 percent of his threes. Additionally, the 7’3 swing big man doesn’t use his size to get to the free throw line with under 3.0 FTA per game.

This team does have some solid three-point shooters. Maxi Kleber is knocking down 47.2 percent of his treys, and Tim Hardaway Jr., Trey Burke, and Brunson are all hitting better than 39 percent from beyond the arc.

Defensively, the Mavericks are a bottom ten unit in most categories. Dallas is allowing 113.8 PPG and is getting outrebounded by five boards per game.

There are no injury concerns for either team according to the most recent reports. That should lead to a high-scoring game with both teams getting to at least 115 points.