Non-conference NBA action will take center-stage on Saturday night with the Golden State Warriors set to host the Brooklyn Nets in primetime on ABC.

So, VI has you covered with another slate of Best Bets and Game Previews to help handicap all the evening’s top matchups.

The Nets come into this contest as four-point favorites, marking the slimmest margin that Brooklyn has been favored by in the James Harden era.

While the total for Saturday’s matchup currently sits at OU 243.5 – the highest total set for a Warriors game so far this season. 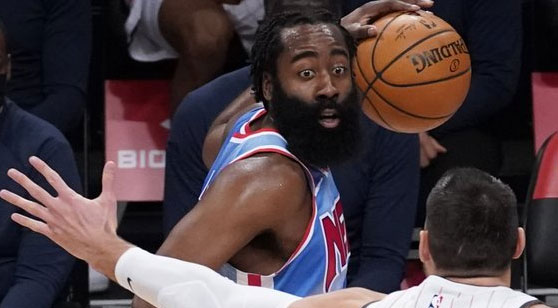 The Nets head west to face the Warriors as Brooklyn goes for the season sweep. (AP)

Golden State comes into this contest having won back-to-back games now, which is already the sixth time this season that the Warriors have countered a loss with consecutive victories.

The Warriors most recent affair resulted in a 6-point victory over the Magic, as Steph Curry continued his scoring montage with another spectacular performance from long-range – drilling 10-19 three-point attempts on his way to his eighth contest with 35 or more points on the season.

On the other side of things, Brooklyn snapped a 3-game losing streak with a 10-point win over the Pacers this past Wednesday, with Kyrie Irving and James Harden teaming up for a combined 54 points, 15 rebounds, and 13 assists during the absence of Kevin Durant.

Brooklyn blew out Golden State by 41 points in last year’s lone regular season matchup between these teams, but that contest was played with Curry on the sidelines – which is typically how things stack up for Steve Kerr’s team when the former-MVP is temporarily removed from action.

Curry did participate in the Warriors opening night matchup this past December against the Nets though, which ended up carrying a similar result anyway – as the Warriors suffered a 26-point loss while posting some dismal shooting numbers from the field (37.4% FGA, 10-33 3PM).

Prior to Brooklyn’s loss to Philadelphia last Saturday, the ‘over’ had cashed in 16 out of 17 Nets games.

Since acquiring Harden back in mid-January, the Nets are 5-5 SU and 2-8 ATS in matchups that they have been favored in. While Brooklyn’s current statistics indicate that the Beard-Experiment has been a failure thus far (especially defensively), the Nets have undeniably flashed signs of overwhelming potential – going 3-1 SU in contests that they have been listed as ‘underdogs’ in, including narrow victories over the Clippers and Bucks.

While the ‘over’ is 19-8 in Nets games so far this year, the ‘under’ has been the hot ticket in Warriors contests – with six of Golden State’s last eight matchups staying ‘under’ the set total, bringing their ‘over-under’ clip down to 11-15 on the season.

Despite the injury to Klay Thompson to get their 2019-20 campaign rolling, the Warriors are off to a surprisingly solid start to the season – sitting at 14-12 on the year, while currently owning the eighth playoff spot in the Western Conference.

Following a seven-day quarantine due to the NBA’s COVID-19 protocols, KD is finally expected to make his return to the court on Saturday.

Brooklyn’s lineup will still remain somewhat out of tact for at least one more game though, as DeAndre Jordan is set to miss the Nets matchup with the Warriors with a personal matter.

Look for Bruce Brown and Jeff Green to continue taking on expanded roles during his absence.

Curry shoulders a significant portion of the Golden State’s offensive load a nightly basis, but nothing compared to what he has been required to do lately – having scored 30 or more points in five of the Warriors last six games, with his lowest scoring-output across that stretch coming during a 31-point win over the Mavericks that he had his minutes cut in (28 points).

I’ll back Curry to knock down six or more three-pointers again here, as he will likely need another extremely productive day from beyond the arc to make a competitive matchup with Brooklyn this time around.

The Nets have been a disappointing team to back since the acquisition of Harden – going 8-6 SU and 5-9 ATS across their first 14 matchups following the trade.

The spread set for Saturday night’s game though, is the smallest number that Brooklyn has been favored by since the Beard came to town. I like the Nets here, as 4.5 points won’t nearly be enough to steer me away from Brooklyn in this matchup.