NBA action returns to ESPN this Valentine’s Day with the stage set for a captivating rematch of last year’s Western Conference Finals between the Los Angeles Lakers and the Denver Nuggets.

VI is getting you ready with more Best Bets and Game Previews to help handicap all the top matchups on the evening’s slate.

The Lakers head into Sunday’s contest as a 3.5-point favorite, marking just the fourth time this season that the Nuggets have been listed as an ‘underdog’ of two points or more.

While the total for this matchup currently sits at OU 216 – the third consecutive Lakers game with an ‘over-under’ set below 220. 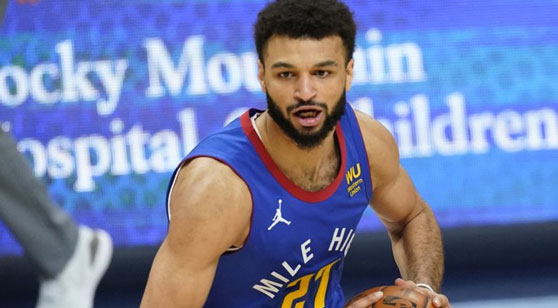 Jamal Murray and the Nuggets look to avenge a road loss to the Lakers on Sunday. (AP)

Los Angeles comes into this matchup riding a seven-game winning streak, despite failing to cover the spread in four of those victories (3-4 ATS).

The Lakers most recent victory came during a rollercoaster of an affair against the Grizzlies, as Memphis jumped out to a 20-2 lead in the first quarter.

Only to have that advantage slowly erased in the final three stanzas of the contest, inevitably resulting in a 10-point win and cover for Frank Vogel’s team.

After losing three straight games to kick off the month of February, the Nuggets have won back-to-back contests now – coming off victories over the Cavaliers and Thunder in their last two matchups.

Nikola Jokic and Jamal Murray chipped in 22 points apiece during Denver’s win over the Thunder this past Friday. It appears Murray picked up a minor ankle sprain during the victory though, which has left his status up in the air ahead of Sunday’s matchup.

During last year’s Western Conference Finals, the Lakers made relatively easy work of the Nuggets – knocking them out of the postseason in just five quick games.

The most recent matchup between these teams occurred roughly a week ago though, which resulted in a 21-point Lakers win behind Lebron James’ second triple-double of the season.

The Lakers come into Sunday’s matchup trailing the Jazz by one game for the top spot in the Western Conference, currently owning a 21-6 SU record while somehow managing a 13-14 record ATS on the season – which includes losses ATS in three of their last four victories.

The ‘over’ is 10-17 in Lakers games so far this year, which is the third lowest clip in the NBA in that department – the Rockets (9-16-1) and Knicks (9-19) being the only teams in the league to stay ‘under’ the total more than LeBron and company this season.

After knocking off the Clippers in a chaotic second-round series during last year’s playoffs, the Nuggets served as the Western Conference’s final line of defense between the Lakers and the NBA Finals.

Los Angeles cruised straight past Denver too though – requiring just 15 total postseason games to advance out of the West.

The total has gone over in Nuggets games at a higher rate than any other team so far this season (18-7) – cashing tickets at a slightly more consistent clip than the Nets (19-8) and Pelicans (17-8) in that department.

James and Davis are both listed on the injury report as questionable for Sunday’s matchup with the Nuggets.

While King James is expected to play with a minor ankle issue, AD’s status is slightly more ambiguous, considering Friday’s win over the Grizzlies was his first game back in action following a three-game absence due to an Achilles injury and there is the chance Los Angeles could opt to play it safe by allowing him to rest during this contest.

The first matchup between these teams resulted in a blowout win for the Lakers and the ‘under’ cashing, as Denver fell seven points short of cracking 100 points during a 21-point victory for Los Angeles just 10 days ago.

After cashing ‘under’ tickets in the first matchup between these teams, the ‘over’ has now hit in three out of the last four Nuggets games – bringing that clip up 18-7 in Denver’s games so far this year.

I’ll back the ‘over’ again here, as I expect the Nuggets to keep this game much more competitive in a higher-scoring affair.