Western Conference action will take center-stage during the final contest of Friday night’s NBA slate with the Los Angeles Clippers set to host the Utah Jazz on ESPN, and VI is getting you ready with another slate of Best Bets and Game Previews to help handicap all the evening’s top matchups.

The Clippers come into this contest as a 4-point ‘underdog’ against the visiting Jazz, marking the 21st consecutive game that Utah has been favored in.

While the total for this event currently sits at OU 224.5 – which is four points lower than the ‘over-under’ that was set for this past Wednesday’s matchup between L.A. and Utah. 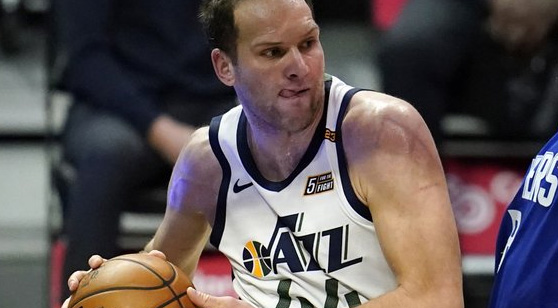 The Utah Jazz own the best record in the NBA, both straight up and against the spread. (AP)

The Jazz come into Friday’s matchup riding an 8-game winning streak, having now claimed SU victories in 19 out of their last 20 games and their only loss across that stretch coming during their trip to Denver back in late-January.

Los Angeles heads into this contest with a 4-3 SU record spanning its past seven matchups, with two of their victories during that timeframe coming on days that Kawhi Leonard and Paul George were both unable to suit up.

Utah has won four of its past five regular season meetings against the Clippers, with two of those victories already coming since the start of the new year.

The Clippers entered the fourth quarter of its New Year’s Day matchup trailing the Jazz by 18 points, but Los Angeles decided to make things interesting by posting 35 points on 57.1% shooting during the final stanza of the contest, which ultimately resulted in a slim, 6-point victory for Utah (Leonard and George both participated in this game).

The most recent affair between Utah and Los Angeles occurred this past Wednesday though, as the Jazz were able to run away with an 18-point victory during the Clippers third consecutive game with both Leonard and George sidelined.

The Jazz head into Friday’s tilt boasting the best record in the league SU and ATS – sitting atop the Western Conference with a record of 24-5 while covering the spread in 22 of those victories.

The greater part of the Jazz lineup was relatively inefficient from the floor during Utah’s victory over the Clippers this past Wednesday – with Donovan Mitchell, Jordan Clarkson, and Bojan Bogdanovic posting a combined 18-55 from the field in the contest.

Utah’s three-point shooting tends to keep them afloat on most nights though – now ranking 4th in the league in 3-point field goal percentage (39.3%) while attempting more shots from behind the arc than any other team in the league on a per game basis (42.3).

The Jazz and Clippers combined for just 210 points in Utah’s victory this past Monday but prior to that contest, the ‘over’ had cashed in eight of L.A.’s last nine contests.

Prior to L.A.’s matchup with Utah earlier this week, the Clippers had won back-to-back games without George and Leonard on the floor.

Their injury struggles finally caught up to them against the Jazz this past Wednesday though, as L.A. fell to Utah by 20 points in a game that Mitchell, Clarkson, and Bogdanovic shot a combined 18-55 from the field in.

Former Defensive Player of the Year, Rudy Gobert, was dominant in Utah’s victory over the Clippers this past Wednesday – scoring 23 points on 8-12 from the floor to go along with 20 rebounds and an assist in the win.

Gobert has now scored 15 or more points five out of his last six games while shooting 78.8% from the field across that stretch. I’ll back his points ‘over’ again on Friday night in another favorable matchup with Los Angeles.

Utah heads into Friday’s matchup currently riding an 8-game winning streak, having now claimed SU victories in 19 out of their last 20 games, which includes two wins over the Clippers already this year.

With George and Leonard’s statuses still uncertain for this contest, I find it extremely difficult to avoid siding with the Jazz again in this matchup.