We’ll have a potential NBA Finals preview tonight on ESPN when the Los Angeles Clippers welcome the Brooklyn Nets to the Staples Center. This will be the second meeting between these teams this season.

The Nets knocked off the Clips in Brooklyn, 124-120 three weeks ago behind Kyrie Irving’s game-high 39 points and a triple-double from James Harden. L.A. is 6-3 since that loss, but all three of those defeats have been at home. 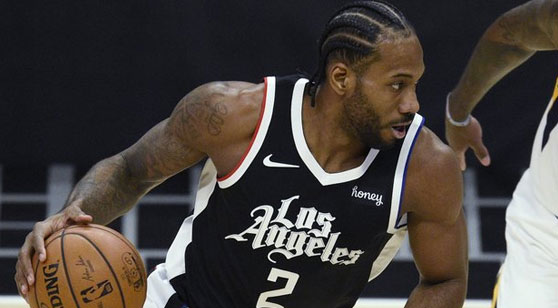 Kawhi Leonard returned to the Clippers' lineup on Friday and lifted L.A. past Utah as a short underdog. (AP)

Brooklyn is starting to come together after a three-game losing streak in early February that was capped off with a loss to lowly Detroit. The Nets have responded with five consecutive victories since that defeat, and they are on the verge of winning all five of their road games during this West Coast swing.

They beat Golden State by 17 points last Saturday before knocking off Sacramento and Phoenix in back-to-back nights. Brooklyn then traveled to Los Angeles to take on the Lakers, and the Nets picked up a 109-98 victory over the defending champions.

LeBron James became the third player in NBA history to surpass 35,000 points in the loss. The Lakers were without both Anthony Davis and Dennis Schroder in the game, so they had a hard time scoring aside from James.

Brooklyn was without Kevin Durant for the third straight game, but Joe Harris and Timothe Luwawu-Cabarrot combined to sink 11 of their 15 combined triples.

The Clippers have won four of their last five games. They have been pretty consistent nearing the halfway point of the season, and they secured their biggest win yet on Friday night.

Los Angeles put an end to Utah’s nine-game winning streak. The Jazz amassed the best record in the league during their run, and they knocked off the Clippers on Wednesday. The Clips didn’t have Paul George and Kawhi Leonard in that game, but they did have their top two players for the rematch on Friday.

Leonard led the way with 29 points in the win. The bench was key to the victory though, as Lou Williams and Marcus Morris came off the bench to provide a spark.

Unfortunately, the Nets will be without Durant for the fourth straight game this Sunday. Durant has been dealing with a pulled left hamstring that has left him sidelined for the last week.

KD was originally slated to miss just two games, but it appears the Nets are being extra cautious with one of their superstars. Brooklyn will miss his production.

It’s a new Harden we have seen in Brooklyn. Harden is the third-leading scorer on the Nets, but he is the primary ball handler. He currently leads the Nets with 8.2 RPG and 11.7 APG, making him a triple-double threat on a nightly basis.

Harden is not taking nearly as many shots as he was in Houston. In Brooklyn, he is picking his spots more, helping make him a 50/40/90 shooter.

Irving is even more efficient than Harden from the floor. He is able to receive open looks with Harden setting up plays, helping him make 52.9 percent of his field goals and 42.7 percent of his threes.

The youngest member of the Nets did not have a good game against the Lakers on Thursday night though, going 0-5 from the three-point line and turning the ball over five times.

Brooklyn games are some of the highest scoring in the NBA. The Nets lead the NBA in scoring (121.3 PPG), but they are one of the worst defensive teams (117.3 PPG allowed). Opposing big men tend to thrive in particular against the Nets, as Brooklyn allows 52 PPG in the paint.

The Clippers showed once again they can take down the best teams in the league when fully healthy. This is the deepest team in the NBA with players like Williams, Morris, and Ivica Zubac coming off the bench to make an impact with their minutes.

Of course, the reason this team is a contender is the tandem of Leonard and George. Leonard leads the Clips in points (26.8 PPG), assists (5.0 APG), and steals (1.7 SPG). He is the best on-ball defender in the NBA, and he can help slow down the best offense in the league in Brooklyn.

George is putting up superb shooting numbers. He is making 50.4 percent of his field goals, 47.2 percent of his threes, and 90.7 percent of his free throws. The 11-year veteran is having his most efficient shooting season by a mile, and he is currently on pace for career highs in all three of those categories.

Typically, people sparingly talk about defense during the regular season in the NBA, but that isn’t the case with the Clippers. They are fifth in the league in scoring defense (108.7 PPG).

This team is one of the best defensive rebounding teams too, and their overall numbers could be even better if they didn’t let up in the fourth quarter with games already salted away. While L.A. is in the top ten defensively in scoring by quarter for the first three quarters, the Clips are ranked 25th in the fourth quarter.

L.A. has the edge this time around with Durant out of the lineup. The Clippers will be much better equipped to take down the Nets without having to worry about Durant on the wing.