Eastern Conference NBA action will pick back up on Tuesday night, starting with the Raptors set to host the 76ers in Tampa, Florida to kick off the early slate. So, VI is getting you ready with a variety of in-depth previews to help handicap all the evening’s top matchups.

Philadelphia heads into this contest as a short, road favorite against Toronto – marking the fifth time in the past seven games that the Raptors have been listed as an underdog.

While the ‘over-under’ for Tuesday’s matchup currently sits at OU 224.5 – with both these teams staying ‘under’ totals set in the 220’s during each of their previous two contests. 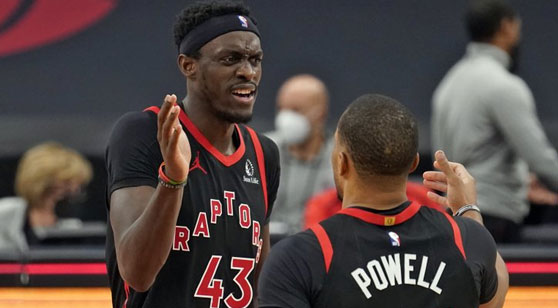 The Raptors captured the first leg of their two-game series with the 76ers on Sunday evening. (AP)

After getting off to a cringe-worthy start to the new season, the Raptors are finally beginning to show signs of the team they posed as last year – having now won four straight games, making nine victories in Toronto’s last 12 matchups.

While the Sixers come into Tuesday’s matchup boasting wins in two of their last three contests – highlighted by a 50-point scoring spectacle from Joel Embiid during Philadelphia’s victory over the Bulls this past Friday.

Philadelphia is now 3-7 SU in their last 10 matchups against Toronto, with the most recent contest between these teams occurring this past Sunday – which resulted in a 7-point victory for the Raptors, propelled by 23 points apiece from Pascal Siakam and Fred VanFleet.

The ‘over-under’ for Tuesday’s matchup currently sits a few points higher than the total that was set for the most recent meeting between these teams (OU 224.5) – despite combining for just 213 points during Toronto’s victory this past Sunday.

While all the additions that the Sixers made this past offseason appear to be paying off right about now – with Philadelphia currently sitting atop the Eastern Conference, plus the presumable favorite to win this year’s MVP in Embiid paving the way for them.

The Sixers have still shown the same vulnerabilities that they demonstrated in previous seasons, with Sunday’s loss to Toronto bringing their record to 7-9 SU on the road this year.

I’m not quite ready to start consistently fading Philadelphia on the road quite yet though. The Sixers current record away from the City of Brotherly Love isn’t nearly as atrocious as the 12-26 clip that they posted in that department last year.

It’s also safe to say that losses to the Suns, Jazz, Nets, Blazers under their current constructions aren’t necessarily “letdown” spots away from their own arena.

The Raptors stumbled out of the gate to start this season – dropping six of their first seven matchups, which included a disastrous offensive effort against the Sixers back in December in which Toronto shot just 32-90 from the field during a seven-point victory for Philadelphia.

Siding with the Sixers is my preference for Tuesday’s matchup, but if you are looking for a side of the total to stand on in this game, the ‘under’ is most likely the play here.

Four out of the last five contests containing Toronto have stayed ‘under’ the total, along with both Raptors-Sixers matchups so far this year – which both had a total set lower than OU 224.

Philadelphia-native and Villanova-product, Kyle Lowry, is listed as questionable for Tuesday’s contest with the ankle injury he sustained during Toronto’s victory over the Bucks last week. If Lowry is unable to suit up for this matchup, it will mark the point-guard’s fourth consecutive absence.

Embiid put on his worst offensive performance of the season so far during Philadelphia’s matchup with Toronto this past Sunday – tallying just 25 points on 6-20 from the field to cap off a seven-point loss to the Raptors down in Tampa.

Prior to this past Sunday’s matchup though, Embiid had scored 30 or more points in eight of the Sixers last nine games – which includes his career-high, 50-point outing that he mounted during a victory over the Bulls this past Friday.

I’ll back ‘The Process’ to get back on track here with another 30-point performance in a rematch with Toronto.

Despite bearing the brunt of a strenuous West Coast road-trip across the past week or so, Philadelphia has still managed to hold onto the top spot in the Eastern Conference with a record of 20-11 SU – currently pacing the Nets by half a game in the Atlantic Division.

While the Raptors are sitting above .500 for the first time this season with a record of 16-15 SU, after picking up a fourth straight win over the Sixers in their most recent contest.

I’ll back the Sixers to bounce back here though, as Tuesday should serve as a perfect opportunity for Doc Rivers’ guys to iron out some issues before returning to the Wells Fargo Center for a homestand.