Non-conference NBA action will take center-stage on Tuesday night with the Celtics set to host the Clippers in primetime on TNT. So, VI is getting you ready with a variety of betting resources to help handicap all the evening’s top matchups.

The Celtics head into Tuesday’s matchup as a 3.5-point ‘underdog’ against the visiting Clippers, which snaps Boston’s 11-game streak of being listed as a favorite. While the ‘over-under’ for this event currently sits at OU 224.5 – after both these teams cashed under tickets against totals in the 230’s during their most recent affairs. 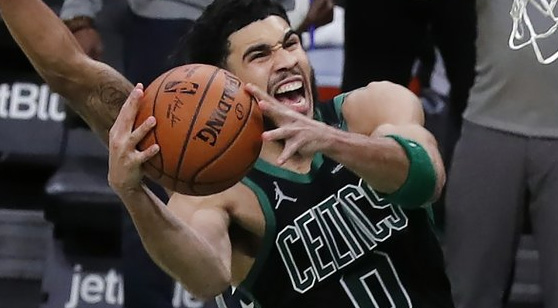 The Boston Celtics have won three straight and four of their last five games at TD Garden. (AP)

Despite being favored by six points or less in each of the past five contests, the Celtics have now lost four of their last five games against the spread, with Boston’s only victory ATS across that stretch coming in a 6-point win over the Pacers.

The Celtics most recent affair resulted in an extremely narrow victory over the Wizards this past Friday – as Jayson Tatum made a gutsy driving layup through contact to give his team a 111-110 lead with a little more than four seconds on the clock, which ended up holding as a 1-point victory for Boston.

The Clippers also head into Tuesday’s contest in the midst of a rough patch, having lost three of their last five games SU, with L.A.’s only victories across that span coming against subpar opponents in the Wizards and Grizzlies.

L.A.’s most recent matchup resulted in a five-point loss to the Bucks in Milwaukee – as Giannis Antetokounmpo torched the Clippers for 36 points, 14 rebounds, and five assists on 15-27 shooting in a statement win for Mike Budenholzer’s guys in the Eastern Conference race.

The Celtics and Clippers split a pair of games during last year’s regular season, with both matchups requiring extra time in order to determine a winner. The first of those contests resulted in a victory for the Clippers behind 52 combined points from Paul George and Lou Williams.

While it was the Celtics who ended up escaping with the victory in the second matchup between these teams – as Jayson Tatum racked up 39 points on 14-23 shooting in a double-OT victory for Boston.

The most recent affair between the Clippers and Celtics occurred roughly a month ago though, which resulted in a 4-point win for the Celtics during one of George’s various absences.

The Clippers currently own the third-best record in the league SU, with the only teams owning a better record than them being the Lakers and the Jazz at the moment. They have also been impressive against the spread – ranking 7th in that department with a record of 20-16 ATS on the season.

Despite staying 'under' the total in three straight games, the ‘over’ is 20-15-1 in Clippers contests so far this year, which also ranks 7th across the league as we approach Monday’s tilt.

The Celtics snapped a three-game losing streak with a win over Indiana this past Friday, which was then followed up with a one-point victory against Washington on Sunday.

Prior to those back-to-back wins though, Boston had lost eight of its last 11 games SU – while being favored in all those matchups except two (UTA -5.5, PHX -3).

The ‘over-under’ in Celtics games has been a tricky wager to gain insight to this season – given the total of Boston’s games have gone ‘over’ at a nearly even clip of 18-16 (52.9%).

If you are looking for a side of the total to play though, high-scoring appears to be the trend heading into Monday – considering five of the last seven games containing Boston have gone ‘over’ the total.

Kawhi Leonard heads into Monday’s contest having scored 27 or more points in six of his last eight games – only failing to eclipse that number during a 28-point loss to the Grizzlies (17 points) and in his 25-point performance against the Bucks on Sunday.

During a loss to the Celtics back in early February, Kawhi scored 28 points on 9-19 from the field as Boston while missing all five of his three-point attempts. I’ll back Kawhi to have a better night shooting the ball this time around while going over that number again in a primetime rematch with Boston.

Boston escaped its February matchup against Los Angeles with a slim victory on the shoulders of an explosive 34-point performance from Tatum, as the Clippers fell just four points shy of knocking off the Celtics in their first meeting of the season without George in the lineup.

This time around though, it will be the Celtics who are short-handed with Marcus Smart ruled out and Brown’s status still in question for Tuesday’s tilt. I’ll back the Clippers to bounce back here and even up their regular season series with Boston at one apiece.