Perhaps it’s fate that the two best teams in each conference will meet in a potential NBA Finals preview just before the All-Star Break. The Philadelphia 76ers are currently the best team in the Eastern Conference, while the Utah Jazz are the team to beat in the Western Conference given their play over the first half of the season.

Utah knocked off Philadelphia in Salt Lake City back on February 15 in the lone prior meeting between these teams. The Jazz beat the Sixers, 134-123 behind Jordan Clarkson’s 40 points. Ben Simmons had a career-high 42 points for Philly, but it wasn’t enough. 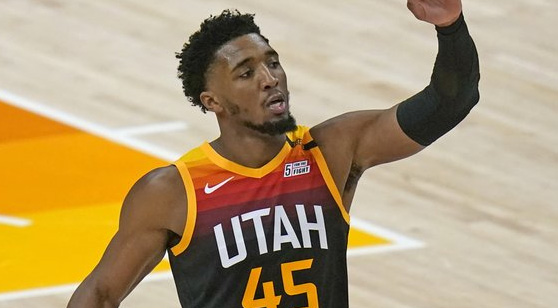 The Utah Jazz own the best record in the NBA but the club has gone 1-2 on its current road trip. (AP)

Philadelphia has been one of the top teams in the East throughout the first half of the 2020-21 season. The Sixers have had some hiccups like a three-game road losing streak in the middle of February, but this team has led the East most of the year. A lot of that has to do with their sterling home record as Philly is 15-3 at home and 8-9 on the road.

Two of Philadelphia’s three home losses have come against Western Conference teams. The 76ers lost to Denver back on January 9 and fell to Portland on February 4. Their other home loss was this past Saturday when the Sixers fell to Cleveland in overtime despite 42 points and 13 rebounds from Joel Embiid.

The Sixers bounced back from that loss with a 130-114 win over Indiana on Monday night. Shake Milton came off the bench to lead the team with 26 points on 9 of 14 shooting, while Embiid and Simmons had solid nights from the floor too. The Pacers could only make 27.6 percent of their threes on the evening.

Utah was on a tear for five weeks. The Jazz won 20 of 21 games from January 8 to February 17, but they have fallen off over the last couple weeks. They have split their last six games with road losses against the Clippers, Heat, and Pelicans.

Their 129-124 loss to New Orleans on Monday night was unexpected as Utah was a seven-point road favorite in that game. New Orleans only shot 11 three-point attempts in that game, but the Pelicans made 56.5 percent of their baskets to escape with a victory.

Donovan Mitchell leads the way for the Jazz. Mitchell is currently averaging 24.4 PPG, 4.6 RPG, and 5.4 APG as a nice all-around player, and his ball handling and shot selection is one of the reasons this offense is so efficient. He makes a lot of great decisions with the ball, setting things up for fellow guards Clarkson and Mike Conley.

Clarkson is someone that can come off the bench and pour in the points. He is Utah’s second-leading scorer with 18.2 PPG, making 45 percent of his field goals and 37.2 percent of his threes.

Clarkson is making 55.7 percent of his two-pointers, but he has failed to score more than 20 points in a game since his 40-point explosion against the Sixers two weeks ago.

Conley will go down in history as the best NBA player to never make an All-Star Game. The veteran guard is having a fine season with the Jazz, averaging 16.0 PPG and 5.8 APG.

Critics said that he was on his last legs last season, but he is having the last laugh with his performance during the 2020-21 campaign. Conley is making 41.3 percent of his threes.

The big man with the best chance of slowing down Embiid is Rudy Gobert. The two-time NBA Defensive Player of the Year is having another elite defensive season, and he is a double-double lock each night. Gobert is averaging 14.2 PPG and 13.2 RPG, and he has pulled down at least nine boards in 14 straight games.

Embiid is one of the favorites to be named NBA MVP. He is averaging 29.8 PPG and 11.3 RPG this season and currently ranks second in PER behind Nikola Jokic. Embiid and Jokic are the only two players with a PER over 30 in the NBA.

Tobias Harris is the second-leading scorer for the 76ers, but he might not be available on Wednesday night. Harris hasn’t played since last Thursday’s win over Dallas, and Philadelphia might not want to bring him back and potentially risk further injury prior to the All-Star Break.

Philadelphia has a great three-point shooter in Seth Curry. Curry is thriving in the modern NBA, as he has knocked down at least 42 percent of his threes in each of the last five seasons. He is making 44.6 percent of his treys this year, and that has given the Sixers a real option on the perimeter to help exploit defenses.

Ben Simmons remains the biggest question mark on the team and perhaps the biggest mystery in the league. There’s no denying his talent, but he is a guard that isn’t reliable from downtown and struggles in the half-court.

Simmons is making 57.3 percent of his field goals and averages 8.0 RPG and 7.7 APG though.

Utah is currently third in scoring offense and third in scoring defense. The Jazz do a great job shooting beyond the arc and defending the perimeter. All seven of their three-point shooters are averaging at least 37 percent from distance, so the Sixers will have a tough time overcoming that efficiency.