Eastern Conference NBA action will return to TNT on Thursday night with the Celtics set to host the Nets in the first nationally televised matchup of the evening. So, VI is getting you ready with a variety of betting resources to help handicap all the top matchups.

The Nets come into Thursday’s matchup as a 2.5-point favorite against the visiting Celtics, marking the 14th time that Boston has been listed as an ‘underdog’ this season.

While the total for this contest currently sits at OU 234 – which is the second highest ‘over-under’ set for a matchup containing the Celtics so far this year. 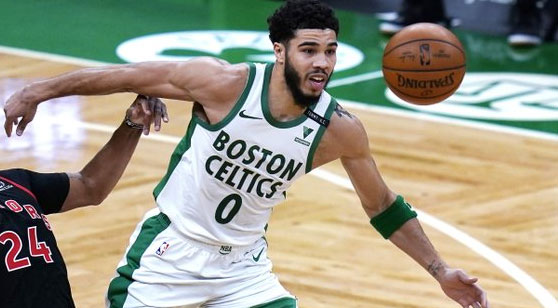 Jayson Tatum and the Celtics enter Brooklyn on Thursday on a four-game winning streak. (AP)

Despite currently riding a four-game winning streak, the Celtics head into Thursday 2-2 ATS in their last four matchups – with Boston’s only victory against the number during that span coming in a tight battle with the Clippers that Kawhi Leonard did not participate in (BOS +4.5).

The Celtics' most recent affair resulted in a seven-point victory over the Raptors in a contest that Pascal Siakam, Fred VanVleet, and O.G. Anunoby all missed for health and safety protocols.

On the other side of things, the Nets had an eight-game winning streak snapped in a loss to the Mavericks during their final matchup of February. Brooklyn still managed to cruise into the All-Star Break on a high note though – after nabbing back-to-back wins over the Rockets and Spurs to wrap up the first half of their season.

The Nets have won three of their last four regular season meetings against the Celtics, with their most recent victory coming in blowout fashion during this year’s Christmas Day festivities, 123-95.

Believe it or not, Boston actually went into the halftime break of that matchup with a 3-point lead. The Nets went off for 72 points on 65.8% from the field and 13-14 from downtown in the second half though – which was propelled by monster performances from both Kyrie Irving (37 points, 13-21 FGA, 7-10 3PA) and Kevin Durant (29 points, 9-16 FGA, 3-4 3PA) as Brooklyn rolled to an easy come-from-behind victory.

James Harden’s first contest as a member of the Nets came back on January 16th in a 7-pont win over the Magic at the Barclays Center. So for those who are wondering, Harden was not present during the first matchup between Boston and Brooklyn this year.

Prior to the Celtics most recent stint of success, Boston went on a three-game losing streak to cap off an 3-8 SU run towards the middle of last month – with their only victories during that span coming against the Nuggets, Hawks, and Raptors.

The total has gone ‘over’ in four of the last five Nets games now. Make note though, that the one game that stayed ‘under’ the total during that timeframe came against an ‘over-under’ set in the 230’s (U 232 vs Washington), which is where the number for Thursday’s matchup currently sits (OU 234).

Durant has now missed nine consecutive matchups with a hamstring issue that he picked up a win over the Warriors back in mid-February.

Brooklyn still hasn’t missed a beat on the offensive end of the floor though – considering the Nets have won eight of the past nine contests KD didn’t participate in, while scoring 124 or more points in six of those matchups.

The total has gone over in 25 of 37 matchups containing the Nets so far this year – which is the third highest clip in the league in that department. Make note though, that the ‘under’ has cashed in four of the last seven Brooklyn games.

Since being acquired from the Rockets back in January, Harden’s volume shooting numbers have been relatively disappointing when compared to the tremendous scoring outputs he became notorious for over the last few years – averaging 25.5 points per game on less than 17 field goals attempted per contest following his departure from Houston.

When KD is removed from the lineup though, the Beard tends to go back to his old ways – having scored 27 or more points in seven of his last nine games now, while putting up nine or more three-point attempts in six of those contests.

I’ll back Harden to have another big night on the scoreboard here in a tough primetime matchup with Boston.

Even though Durant participated in just three contests during the month of February, the Nets wrapped up the first half of their season on a 10-1 SU run – with their only loss across that stretch coming in a matchup with the Mavericks that Irving also did not play in.

I’ll lay the short total with Brooklyn here, as I believe the Nets are destined to prove that they are the top team in the Eastern Conference during the second half of this season, and that starts with a big win in primetime over the Celtics on Thursday night.