Non-conference NBA action will resume on Friday night with the Lakers set to host the Pacers during the final contest on NBA TV’s nationally televised slate. So, VI is getting you ready with a variety of betting resources to help handicap all the evening’s top matchups.

The Lakers head into Friday’s contest as a 4.5-point favorite, marking the fifth time Indiana has been listed as an ‘underdog’ across their last six games.

While the total for this matchup currently sits at OU 216.5 – which is the lowest number set for contest containing the Pacers since they squared off with the Pistons on February 11th (U 215). 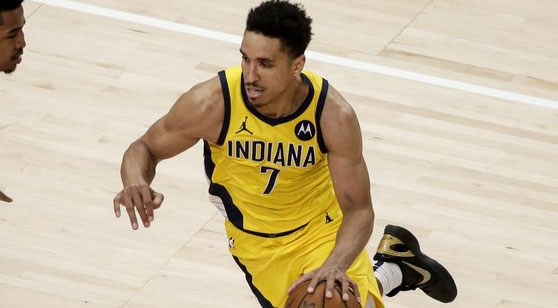 The Pacers look to end their road woes as they begin the second half against the Lakers on Friday. (AP)

The Lakers wrapped up the first half of their season on a 2-3 SU skid – which includes losses to the Jazz, Suns, and Kings across that stretch.

LeBron James did not participate in L.A.’s most recent loss to the Kings though – as Dennis Schroder, Montrezl Harrell, and Kyle Kuzma all chipped in 20+ points during a slim, 3-point victory for Sacramento.

The Pacers, on the other hand, went into the All-Star Break riding a six-game losing streak ATS, with their only SU victory during that timeframe coming in a tight win over the Cavaliers at the start of March as 6.5-point road favorites.

Indiana’s most recent affair resulted in a loss to the Nuggets – as Nikola Jokic, Michael Porter. Jr., and Jamal Murray combined for 67 points during a 10-point victory for Denver.

Although the Pacers and Lakers have still not squared off this year, Indiana has won three straight regular season matchups against Los Angeles – with the most recent of those victories coming during a seeding game in the NBA-bubble this past August, 116-111.

T.J. Warren (15-22 FGA) and James (13-24 FGA) both put on extraordinary 30-point performances during that matchup. The Pacers put together a better team-effort in the contest though – considering three Indiana players scored 20 or more points, while LeBron happened to be the only LAL starter to crack double-digits.