Eastern Conference NBA action will resume on Monday night with an inner-city showdown between the Knicks and Nets set for primetime on ESPN. So, VI is getting you ready with a variety betting resources to help handicap all the evening’s top matchups.

The Nets head into Monday’s contest as an 8.5-point favorite over the visiting Knicks, which is just the second time since the start of February that New York has been listed as an underdog of seven points or more.

While the total for this matchup currently sits at OU 225, which is the lowest ‘over-under’ set for a Nets game since they met up with the Cavaliers on January 22nd (O 223.5). 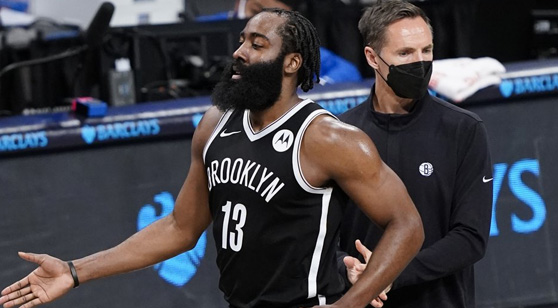 James Harden and the Nets have gone 4-0 straight up and 3-1 against the spread since the All-Star break. (AP)

The Knicks have alternated wins and losses SU and ATS during their last four games, with New York’s only wins across that stretch coming against the Pistons and Thunder.

The most recent of those victories came this past Saturday in Oklahoma City, as R.J. Barrett recorded a career-high, 32 points on 12-21 from the field in a 22-point victory for New York.

On the other hand, the Nets head into Monday’s contest riding a four-game winning streak, which includes victories over the Celtics, Rockets, Pistons, and Spurs during that timeframe.

The Nets failed to cover an 11-point spread during a win over the Pistons in their most recent affair, but this was just the second occasion Brooklyn had failed to cover the spread set for a contest since February 10th (13 games).

The head-to-head history between the Knicks and Nets is rather useless, considering the only matchup between them this season was played without Kyrie Irving and James Harden – and was played with Kevin Durant.

For what it’s worth though, the first matchup between New York and Brooklyn resulted in a 7-point win for the Nets. Julius Randle ended up leading the contest in scoring with 30 points on 13-25 from the field, but it was the collective effort of Brooklyn that persevered – as seven different Brooklyn players managed to crack double-digit scoring in the victory.

Despite currently ranking in the middle of the pack with a 20-19 SU record, the Knicks boast the second-best record in the Eastern Conference against the spread at 22-17 so far this year.

New York became accustomed to playing extraordinary basketball during the first half of contests recently – now owning the best 1H ATS record in the NBA (27-11-1), which includes an 8-2 clip across their last 10 matchups.

The ‘over’ is 16-23 in New York’s games so far this year – which ranks 28th in the league in that department. Make note though, that the total in six of seven matchups containing the Knicks.

Durant is set to miss is 12th straight game with the hamstring injury he picked up during Brooklyn’s blowout win over the Warriors back in mid-February.

Clearly though, the Nets have no reason to rush KD back to action – considering the Nets are 10-1 SU and 9-2 ATS since the injury to their superstar forward, with their only actual loss across that stretch coming in matchup against the Mavericks that Kyrie also did not participate in.

The ‘over’ is 2-4 in Brooklyn’s past six games. Make note though, that the ‘over-under’ for seven of the last nine matchups containing the Nets have been set at 229 or higher.

Barrett picked up the second half of his season right where he left off prior to the All-Star Break, having scored 20 or more points in five of his last six games – with the Duke-product’s lowest scoring output across that stretch coming in a 26-point loss to the Spurs that he played just 28 minutes in (15 points).

In New York’s first matchup with the Nets this season, Barrett scored 20 points on 7-15 from the floor. I’ll back Barrett to go over his number again here, as he should have no problem consistently getting to the basket against Brooklyn’s porous defense.

The Nets head into Monday as winners in 12 of their last 13 games, with their only loss across that stretch coming in a matchup with the Mavericks that Irving and Durant both did not participate in.

They have also managed to cover the spread in three of their last four games – while being favored by 10 or more points in half those matchups. I’ll back the Nets to cover here, as I fear the Knicks ability to keep up with a team that shoots the longball at the rate Brooklyn typically does.