In the midst of the NCAA tournament’s second-round madness, Eastern Conference NBA action will resume Monday night on NBA TV with the Bucks set to host the Pacers in the lone matchup for the league’s nationally televised slate.

So, VI is getting you ready with a variety of betting resources to help handicap the top matchups on the evening’s slate.

The Bucks head into Monday’s contest as a 5.5-point favorite – marking the seventh time in the last eight games that Indiana has been listed as an underdog.

While the total for this matchup currently sits at OU 229, which is just the seventh time since the start of February that the ‘over-under’ for a contest containing Milwaukee has been set below 230. 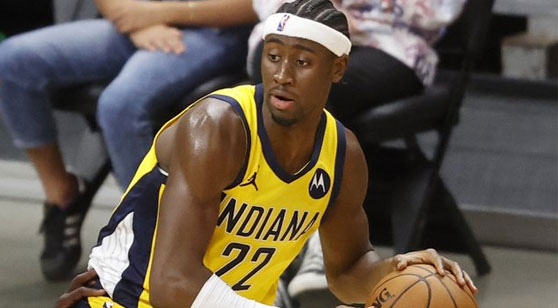 The Pacers head to Milwaukee after grabbing a pair of road victories over the Heat. (AP)

The Bucks come into Monday’s tilt having won six straight games SU – while only managing to cover the spread in two of the matchups across that stretch against the Wizards and Knicks.

Milwaukee’s most recent affair resulted in 7-point win over the Spurs as 11.5-point favorites, which caps of a miserable 6-11 ATS run for the Bucks – now ranking 19th in the league in that department (19-22).

On the other hand, the Pacers head into Monday’s matchup following back-to-back victories over the Heat this past weekend, despite being listed as underdogs in both of those matchups.

The Bucks have won four of their last five regular season meetings with the Pacers – with all four of those victories coming by 10 points or more.

In the only matchup between Milwaukee and Indiana so far this season, the Bucks ended up running away with another big win, as Bobby Portis and Bryn Forbes combined for 38 points on 15-28 shooting off the bench on the way to a 20-point victory for coach Mike Budenholzer’s team.

Caris LeVert finally made his Pacers debut in an 11-point win against the Suns a little over a week ago, which has given Indiana its first offensive spark since trading away Victor Oladipo to Houston back in mid-January – with the newly acquired asset chipping in 13 or more points in four of his first five games with his new team.

While the initial loss of Oladipo hindered Indiana’s progress, LeVert’s addition to the lineup appears to have brought them back to their baseline, at least – considering the Pacers have now won three of five games since his addition to the lineup, despite being listed as an underdog in all of those matchups, except one against the Nets.

Also, make note that since LeVert joined the Pacers out on the floor, the total has gone ‘over’ in four of five games.

After a bumpy start to the 2020-21 season, the Bucks are quietly blossoming into the title-contenders that we expected them to be – having now won 11 of their last 12 games, sitting just two games behind the 76ers for the top spot in the East.

The total has gone ‘over’ in four of the last five Bucks games, which makes the ‘over’ 24-16-1 in matchups containing Milwaukee so far this year – tying Indiana for fifth in the league in that department.

If you are thinking about laying the points with the Bucks in this matchup, make sure to note that Giannis Antetokounmpo is listed as doubtful for this contest due to a knee strain – which would be just the second game so far this season that the former-MVP has not suited up in, if he is unable to go.

Domantas Sabonis tallied just five assists during Indiana’s back-to-back set with the Heat this past weekend, which is his lowest assist-total across a two-game span so far this season.

Prior to last weekend’s matchups though, Sabonis had recorded seven or more assists in eight of his last nine games – with his lowest dime-output across that stretch being his 6-assist performance in a victory over Cleveland.

I’ll back Sabonis to bounce-back and go ‘over’ his assist number in a tough matchup with the Bucks here.

Despite heading into Monday’s matchup riding a six-game winning streak SU, the Bucks have only covered the spread in two matchups during their latest spree of success – with Milwaukee’s only victories ATS during that timeframe coming in double-digit blowouts over the Knicks and Wizards.

I’ll take the Pacers with the points here, as Indiana shouldn’t have too much trouble keeping this game within a 6-point window, and could even walk away with a victory if Antetokounmpo is unable to suit up.