Injuries have taken a lot of the polish off a potential NBA Finals preview on Thursday night. The Los Angeles Lakers will face the Philadelphia 76ers for the second and final time in the regular season, but both teams will be without their best players.

Philadelphia has been without star center Joel Embiid for the last two weeks after he sustained a knee injury in a win over Washington. Meanwhile, Los Angeles will be without LeBron James and Anthony Davis, and the Lakers have not been the same team without their two All-Star talents. 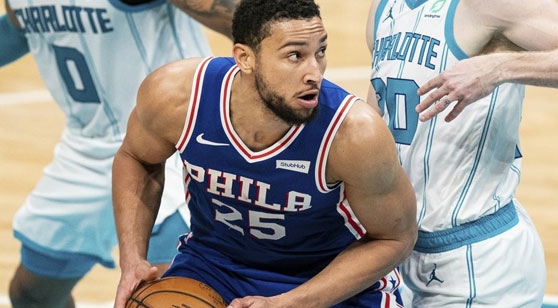 The 76ers continue their west coast swing on Thursday night with a trip to L.A. to face the Lakers. (AP)

The Lakers were 21-6 and favored to finish atop the Western Conference in mid-February. James was one of the favorites to be named NBA MVP, and Davis was perhaps playing even better than his teammate. Then, Davis was injured in a loss to Denver on Valentine’s Day, throwing this season into a tailspin.

Los Angeles has gone 7-10 since Davis hit the injury list. James led the team to a .500 record in Davis’ absence, but the Lakers have bottomed out since the four-time NBA MVP suffered a high-ankle sprain. He is expected to miss several weeks, so it’s hard to see this team grabbing one of the top spots in the Western Conference.

This offense is averaging less than 100 PPG in its three games (all losses) without James or Davis. Los Angeles failed to beat either Atlanta or Phoenix over the weekend, and the Lakers lost 128-111 to New Orleans on Tuesday night.

Former Laker Brandon Ingram had a monster performance in his return to Los Angeles, and Zion Williamson was impressive too.

Philadelphia is currently the best team in the Eastern Conference. The 76ers are one game ahead of the Brooklyn Nets for the top spot, and they have won 13 of their last 16 games.

A lot of their success has come at home against Eastern Conference opponents though as Philly is 19-4 in the City of Brotherly Love and 22-7 against the East.

The Sixers have not lost a game in regulation since February 21. Their two losses since that point came in overtime to Cleveland and Milwaukee. Playing extra minutes is a common occurrence for this team in recent weeks as four of Philly’s last 11 games have needed overtime to decide the winner.

We saw Philly take down Golden State 108-98 in a back-and-forth affair on Tuesday night. The 76ers led by 18 points after the first quarter, but the Warriors outscored the Sixers by 19 points in the third quarter to take a five-point lead into the final frame. Philly held Golden State to just 13 points in the fourth quarter on its way to the victory.

Philadelphia has done a solid job without Embiid in the lineup. Tobias Harris is averaging 20.8 PPG and 7.7 RPG, leading the way for the Sixers without their All-NBA center available. He is making over 50% of his field goals and 41% of his threes, and he is just tenths of a percentage point away from the 50/40/90 club.

Ben Simmons has stepped up his play too. The No. 1 overall pick in the 2016 NBA Draft registered a triple-double in last Wednesday’s loss to Milwaukee, and he has the potential to explode for a triple-double on any night.

Simmons is averaging 16.1 PPG, 8.0 RPG, and 7.6 APG this season, and is hitting 56.3% of his field goals. This is one of the best on-ball defenders in the NBA, so Simmons can effectively neutralize a player.

He doesn’t provide much else aside from scoring, but Shake Milton can come off the bench and score some points for the Sixers. Milton is averaging 13.8 PPG on the season, and he is averaging 19.3 PPG over Philly’s last four games. He is making just 44.6% of his field goals and 30.4% of his threes though, so efficiency is an issue.

Montrezl Harrell has stepped into the spotlight with Davis and James out. The big man is known as one of the best bench players in the league, but he has seen more action in the last few games.

Harrell has played at least 33 MPG since James was injured, and he is averaging 21.3 PPG and 9.0 RPG over the Lakers’ last three tilts. He has been very efficient rom the floor, making almost 70% of his field goals in this stretch.

The Lakers were hoping for more out of Dennis Schroder. He has underwhelmed this season, making 43.1% of his field goals and 31.7% of his threes. Schroder has been a little more active when it comes to helping out in other ways, but he just hasn’t been a very efficient shooter this year.

Kyle Kuzma is averaging 12.1 PPG and 6.7 RPG for the Lakers this season. Kuzma has not lived up to the hype that some were expecting a few years ago, but he is a solid role player. He is making 44.3% of his field goals and 37.5% of his threes on the year.

The first meeting between these two teams saw James and Embiid both have big games, but Harris scored the game-winner in the final few seconds to give the Sixers a 107-106 win.

His presence will likely loom large once again, as both Harris and Simmons are the two best players on the court without the three All-Stars available. The Lakers’ losing streak will move to four as the Sixers get a nice road win.