Eastern Conference NBA action will take center-stage on Friday night with the Bucks set to host the Celtics in primetime on ESPN.

So, VI is getting you ready with a variety of betting resources to help handicap all the top matchups on the evening’s slate.

The Bucks come into this matchup as a 5.5-point favorite over the visiting Celtics, which marks the 18th consecutive game Milwaukee has been favored in.

While the total for this contest currently sits at OU 233, which is just the seventh time the ‘over-under’ for a matchup containing Boston has been set in the 230’s this year. 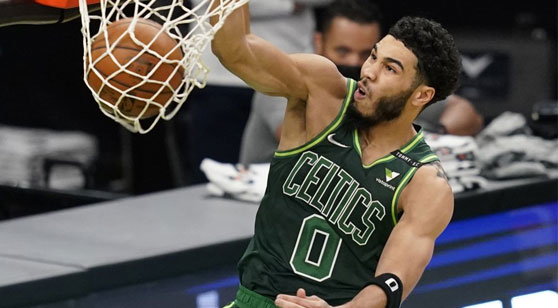 Jayson Tatum and the Celtics came up short in Wednesday's road defeat to the Bucks. (AP)

The Bucks head into Friday’s contest riding a eight-game winning streak – with Milwaukee’s most recent defeat coming in a matchup against the Nuggets back on March 2nd.

While the Celtics have now lost five of their last six games – with Boston’s only victory during that span coming in a win over the Magic this past Sunday.

Despite having won eight contests in a row now, the Bucks are 3-5 ATS during their current winning streak – only managing to cover the spread in matchups against the Pacers, Wizards and Knicks during that span.

Contrarily, the Celtics are 2-6 SU in their last eight contests, but still own the same record against the number as Milwaukee during that timeframe – sitting at 3-5 ATS.

Boston and Milwaukee split their first two matchups of this year’s regular season – with the first of those meetings occurring on opening night of the new season, and the second taking place just this past Wednesday.

The first matchup between these teams resulted in a narrow victory for Boston – as the contest concluded with Giannis Antetokounmpo missing a pair of free throws to seal a one-point victory for the Celtics.

The Bucks managed to escape with a narrow victory in their matchup with Boston earlier this week though – as Milwaukee led by 20 or more points for the majority of the contest, but the Celtics’ fourth quarter-comeback fell just short as Daniel Theis missed a potential game-winning three-pointer at the final buzzer.

After reaching last year’s Eastern Conference Finals in the NBA bubble, the Celtics have been extremely underwhelming since the start of this season – currently owning a record of 21-23 SU and 20-24 ATS, while barely holding onto the eighth seed in the East.

It might not appear to be a big deal on the surface, but Boston was pretty active as the trade deadline approached on Thursday afternoon – acquiring Evan Fournier from the Magic and Mo Wagner from the Wizards to add some depth on the wings.

Neither of those guys will immediately fix Boston’s problems on offense, but it will at least give head coach Brad Stevens the ability to send Marcus Smart to the pine for extended periods when he goes into shooting slumps like the one he is currently in – with the Oklahoma State-product shooting a combined 8 of 27 from the field across the Celtics’ last two matchups.

The ‘over-under’ for Celtics’ games are typically positioned much lower on the totem pole than where the total for Friday’s contest currently sits – considering the total has been set below 220 in 20 of 44 matchups containing Boston so far this season.

It took Milwaukee a month or so to find its rhythm on offense after acquiring Holiday from the Pelicans this past offseason, but the Bucks have undeniably hit their stride now.

The Bucks are boasting wins in 12 of their last 13 contests, and their most recent victory coming in a matchup that Antetokounmpo scored just 13 points on 4-11 from the floor in.

The total has gone over in six of the last seven matchups containing the Bucks, which is indicative of how their season has gone so far this year – considering the ‘over’ has now hit in roughly 61% of Milwaukee’s matchups this season, including their high-scoring affair with Boston this past Wednesday.

Antetokounmpo put forth a relatively pedestrian effort during Milwaukee’s victory over the Celtics this past Wednesday, but the Bucks offense still managed to fire on all cylinders – propelled by 27 points on 11-20 shooting from Khris Middleton.

Middleton has now eclipsed 23 or more points in four of Milwaukee’s last five games, with his lowest scoring output across that stretch being his 15-point performance in a win over Philadelphia last week.

I’ll back Middleton to have another solid outing in the scoring department against Boston here.

The Bucks have been red-hot since the start of March – currently sitting at 8-1 SU so far this month, with Milwaukee’s only loss across that stretch coming in a tough non-conference matchup against the Nuggets.

While the Celtics head into Friday’s contest having lost five of their last six games, with Boston’s only victory during that stretch coming in a 17-point win over the skidding Magic.

I’ll back the Bucks to cover here, considering the Celtics are now 5-10 ATS in their last 15 games, and I’m not convinced the moves Boston made prior to the trade deadline will immediately propel them out of mediocrity.