Milwaukee will be tested over the next 11 days. The Bucks head west for a six-game road trip where they face both Los Angeles teams, Portland, Golden State, and Dallas.

This is the longest road trip remaining for the Bucks this season, and they will essentially be done playing Western Conference teams after this stretch. They start this tough run against the Los Angeles Clippers on Monday night. 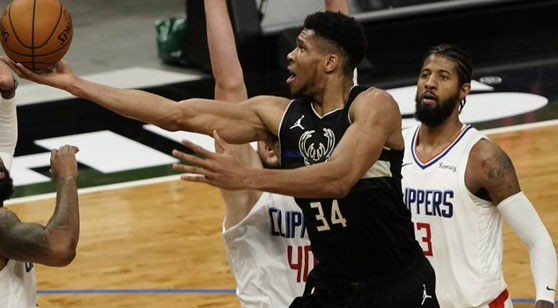 The Bucks travel out west to begin a six-game road trip that starts against the Clippers on Monday. (AP)

The Clippers had a rough stretch from mid-February to mid-March where they went 5-8. They ended up falling to fourth in the Western Conference standings, but they have since won five straight games. The Clips have since surpassed the Lakers and are now just one game behind the Phoenix Suns.

They have won all five of those games by nine points or more, picking up the cover in each of those outings. The Clips are 16-6 SU and 13-9 ATS at home this season.

In their last game, the Clippers bested the 76ers, 122-112. Kawhi Leonard and Paul George led the way as always, but Terance Mann was a major difference maker off the bench. He went 10-12 for 23 points and might be set to take over Lou Williams’ old role.

The Bucks won 13 of 14 games between February 19 and March 24. That has helped Milwaukee make up some ground in the Eastern Conference race, but the Bucks are still behind Philadelphia and Brooklyn in the standings.

Milwaukee has dropped its last two games. The Bucks fell to Boston at home on Friday and then lost Saturday’s game with the New York Knicks. They opened as a double-digit favorite in that game, but they closed as a short underdog as it was announced that Giannis Antetokounmpo, Khris Middleton, Jrue Holiday, and Donte DiVincenzo would all be sitting out.