Non-conference NBA action will resume on Monday night with the Celtics set to host the Pelicans in the first matchup on NBATV’s nationally televised slate.

So, VI is getting you ready with a variety of betting resources to help handicap all the evening’s top events.

The Celtics head into Monday’s contest as a 2.5-point favorite over the visiting Pelicans – marking the sixth time in the last eight games that New Orleans has been listed as an underdog.

While the total for this event currently sits at OU 228.5, which is just the sixth time this season that the ‘over-under’ for a home contest containing Boston has been set above 228. 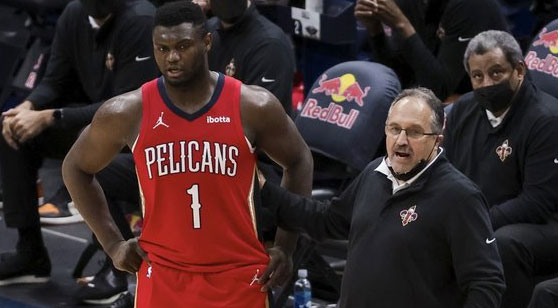 Zion Williamson (L) and the Pelicans look for the season sweep of the Celtics on Monday night. (AP)

After struggling for the majority of March, the Celtics have now won back-to-back games – with wins over the Bucks and Thunder in each of their last two matchups.

Boston’s most recent matchup resulted in a 17-point win over Oklahoma City, which was propelled by solid performances from Jayson Tatum (27 points) and Jaylen Brown (25 points).

The Pelicans also enter Monday’s contest coming off an impressive stretch of games – with New Orleans boasting victories in three of their last four matchups, including wins over the Mavericks, Lakers, and Nuggets during that timeframe.

New Orleans most recent affair resulted in a nine-point win over Dallas, as Zion Williamson racked up 38 points on 13-20 from the floor on the way to his third 30-point performance across the Pelicans last four games.

Boston and New Orleans split a pair of games during last year’s regular season – with both of those matchups going over the total set for Monday’s contest (OU 230.5).

The most recent meeting between these teams took place last month though, as the Pelicans escaped with an overtime victory behind 33 points on 50% shooting from Brandon Ingram.

The Pelicans have had a relatively pedestrian month of March so far – sitting at 6-6 SU and 7-5 ATS since the most recent calendar turn. New Orleans seems to have ramped up the intensity over the last week or so though, picking up SU victories in three of their last four matchups while being listed as underdogs in two of those wins.

The total has gone 'over' in 30 out of 45 (66.7%) Pelicans games so far this year, which is the highest clip across the league in that department. Make note though, the total has stayed under in four of the last five matchups containing New Orleans.

After reaching last year’s Eastern Conference Finals in the NBA bubble, the Celtics have been extremely underwhelming since the start of this season – currently owning a record of 23-23 SU and 22-24 ATS, while barely holding onto the seventh seed in the East.

The Celtics didn’t necessarily hit a homerun in the trade market as last Thursday’s trade deadline approached. Boston wasn’t totally complacent though – acquiring Evan Fournier from the Magic, Moritz Wagner from the Wizards, and Luke Kornet from the Bulls.

The total has gone over in three of the last four matchups containing Boston. Make note though, this is just the eighth time this season that the ‘over-under’ for a Celtics game has been set above 230.

Williamson has made leaps and bounds since entering the league as a rookie last year – currently averaging a team-high, 26.3 points on 62.8% from the field in just his second NBA season.

The former Duke star now heads into Monday’s contest having scored 27 or more points in six of his last seven games, with his lowest scoring output during that timeframe being his 26-point performance during New Orleans’ loss in Portland last Thursday.

I’ll back Zion to have another big day on the scoreboard against the Celtics here.

Despite having a difficult time closing out games throughout the month of March, the Celtics head into Monday’s contest boasting wins in two of their last three contests – with Boston’s only loss across that stretch coming in a 2-point loss to the Bucks, which was a matchup that concluded with Daniel Theis missing a potential game-winning three-pointer at the final buzzer.

New Orleans is streaky and could be fun money line play in this matchup – but I’m going to roll with the better team in the Celtics here, as I have to imagine that Boston is due for a run of success in near future.