Non-conference NBA action will resume on Tuesday night with the Nuggets set to host the 76ers during the lone matchup on NBA TV’s nationally televised slate.

The Nuggets head into Tuesday’s contest as a 4.5-point favorite over the visiting Sixers – marking just the 11th matchup Philadelphia has been listed as an underdog in this season.

While the total for this event currently sits at OU 221, which is the highest over-under set for a Sixers game since they matched up with the Kings over a week ago. 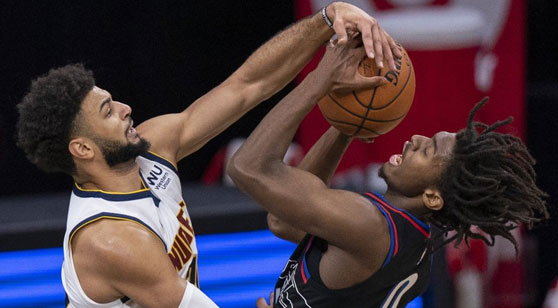 The Nuggets beat the short-handed 76ers as heavy road favorites in their last meeting in January. (AP)

The Sixers head into Tuesday’s contest boasting wins in four of their last five games, despite Joel Embiid being absent during all those matchups due to the knee injury he picked up in Philadelphia’s 22-point victory over the Bulls on March 11th.

The Sixers had another decent night from the field without Embiid on the floor this past Saturday, as well (51% FGA, 38% 3PA). Unfortunately for Philadelphia though, its four-game winning streak was snapped by Clippers as Kawhi Leonard and Paul George combined for 52 points on 48.6% from the field during a 10-point win and cover for Los Angeles.

The Nuggets also come into Tuesday’s matchup with wins three of their last four games – with Denver’s only loss across that stretch coming on the second half of a back-to-back set against the Raptors.

Denver’s most recent affair resulted in a 24-point victory over the Hawks, as six different Nuggets players eclipsed double-digit scoring on the way to Michael Malone’s guys 10th win in the month of March.

Philadelphia and Denver split a pair of matchups during last year’s regular season – with both of those contests occurring prior to the NBA’s stoppage due to the global pandemic.

The most recent meeting between these teams took place back in January of this year though, which resulted in a 12-point win for the Nuggets – as Denver cruised to an easy victory during the absence of Ben Simmons, along with Embiid.

Despite Embiid being set to miss his 10th consecutive game this Tuesday with a knee injury, the Sixers still own the best record in the Eastern Conference, and the second-best record in the whole league at 34-12 SU.

Philadelphia has also been consistent against the spread this year – currently ranking 3rd in the NBA ATS at 26-18-2, trailing just the Jazz and Suns in that department.

That trend has continued since the loss of their big man too, with the Sixers sitting at 6-2-1 against the number across that window, which includes Philadelphia’s blowout victory that he was injured in.

The Nuggets currently sit behind just four teams in this year’s Western Conference standings with a SU record of 28-18. That being said, Denver has been quite underwhelming against the number this year – having covered the spread in just 22 of their 46 games so far.

The heightened expectations that Denver set during last year’s playoffs appear to be returning to normal as the season progresses though – considering the Nuggets have now been listed as a favorite of five points or less in each of their last three matchups, and none of those teams possessed winning records at the time (Hawks, Raptors, Pelicans).

The ‘over’ is 28-18 in matchups containing Denver so far this year, which ranks fifth across the league in that department. Make note though, the total has stayed 'under' in three of the last five Nuggets games.

Danny Green’s first season in Philadelphia has been quite the roller-coaster ride on offense, to say the least – currently averaging 9.7 points per game on 41.5% from the field.

Since the injury to Embiid though, Green has significantly ramped up his scoring production, and has been efficient while doing it – having scored 11 or more points in seven of the Sixers’ last eight games, which includes five performances consisting of 16+ during that timeframe.

I’ll ride the hot-hand with Green here, and back him to eclipse that total in a seventh straight contest.

Embiid’s injury doesn’t seem to be hampering them much either – considering the Sixers currently sit at 11-2 SU and 10-2-1 ATS across its last 13 games, with Philadelphia’s only losses during that stretch coming at the hands of fellow title-contenders in Los Angeles and Milwaukee.

I’ll take the Sixers with the points here, as it’s too tough to avoid siding with a 32-14 squad at plus-money.