It won’t be easy for the Los Angeles Clippers to get past the Denver Nuggets on Thursday night. The Clips will be without multiple key contributors including Paul George, Serge Ibaka, and Patrick Beverley. That has led to the hosts being just a one-point favorite against a surging Denver team that is looking to surpass the Los Angeles Lakers to move into fourth in the Western Conference. 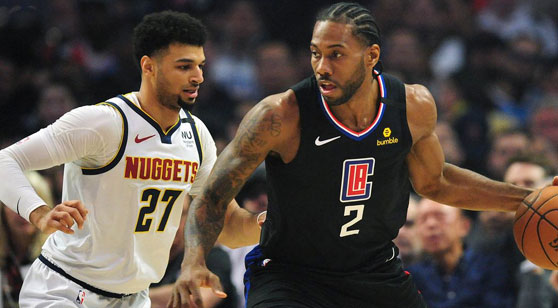 The Nuggets look to seek revenge for a Christmas night loss to the Clippers at home. (AP)

Denver has been a team to fear in March. The Nuggets went 11-3 this month as Nikola Jokic became the favorite to be named NBA MVP. They began the month by winning four straight road games before the All-Star Break, hammering the Bucks in Milwaukee during that stretch for an impressive 31-point victory that doubled as a shot across the bow to the rest of the NBA.

The Nuggets have kept it up after the All-Star Break with an 8-3 record over the second half of the month. They didn’t play the most difficult schedule, but they largely held serve against their foes. Denver has won its last three games ahead of Thursday night’s game with the Clippers, and the Nuggets scored another big win over an Eastern Conference opponent by beating the 76ers on Tuesday.

Philadelphia did not have star center Joel Embiid in that game. That helped Denver grab 17 more rebounds than Philly, as both Michael Porter Jr. and Jokic notched double-doubles in a 104-95 win for the Nuggets. Jamal Murray led all scorers with 30 points, and the rest of Denver’s team scored just 26 points outside their big three.

The Clippers needed the All-Star Break to get right. They lost three straight games prior to the time off, and they went 3-6 over a nine-game stretch before that respite. They alternated wins and losses for their first four games after the All-Star Break. The Clippers won six straight games after that middling start, picking up impressive wins over Philadelphia and Milwaukee. However, they laid an egg against the Orlando Magic on Tuesday night.

Los Angeles was without George, Ibaka, Beverley, Marcus Morris, and new addition Rajon Rondo. Kawhi Leonard played well without so many other contributors, but the rest of the team struggled outside of Ivica Zubac. Still, Orlando dealt most of its starters at the trade deadline, so this will go down as an opportunity wasted for LA.

Jokic is hoping to become just the fifth foreign-born player to be named NBA MVP. We have never seen a center with his preternatural passing ability. Denver’s offense runs through its big man, allowing Jokic to record 26.8 PPG, 11.1 RPG, and 8.5 APG. He has absurd shooting splits for a big man too, leading the Nuggets in both field goal percentage and free throw percentage.

Denver added Aaron Gordon from Orlando at the trade deadline. He is still getting his feet wet and finding his role, but he has been an efficient scorer through two games with his new team. Gordon has 19 total points through those two games, and he is 9-13 from the floor.

Michael Porter Jr. is having a very nice season. Porter has been relatively healthy for the first time in a few years, and he is making the most out of his time on the court. He was lights out in March, making 59.4% of his field goals and 53.2% of his threes to average 20.3 PPG and 9.1 RPG. Porter has recorded a double-double in two straight games.

The guards are not great on Denver, so Jamal Murray is under pressure to succeed. Murray has been sharp during his time with the team, and he is averaging 21.2 PPG with 4.9 APG this year.

The big news for the Clippers is that they are in talks with DeMarcus Cousins on a ten-day contract. The suddenly short-handed Clippers could really use a big man, so they don’t mind taking a flyer on Cousins in the hope that he can rekindle some of the form that made him an All-Star in Sacramento.

Leonard is the heart and soul of this team. Leonard has been worth everything the Clippers gave up to acquire him from Toronto two summers ago. He is averaging 26.0 PPG with a 28.86 PER, and he is close to elite 50/40/90 splits. Leonard has scored at least 23 points in each of the Clippers’ last five games.

The absence of Paul George means that the Clippers need a second scorer. They traded away Lou Williams at the deadline and Serge Ibaka is injured, so this team is hoping that Marcus Morris is able to return from a calf injury after missing the last game. Morris is averaging 12.7 PPG, and he is the best three-point shooter on the roster. He is hitting 46.6% of his attempts from downtown this season.

Terance Mann has seen a lot more action over the last two weeks. He has played at least 23 MPG in each of the Clippers’ last seven games. The team is hoping that Mann can fill Williams’ shoes as a bench scorer, but he has been up and down in that role. Mann shot the lights out in wins over Atlanta and Philadelphia, but he really struggled against Orlando in his last outing. The Florida State product is an excellent rebounder for a guard though with 7.5 RPG in his last six games.

The Clippers’ injury woes will be too much to overcome on Thursday night, and the Nuggets will take advantage to get an important win.