Golden State travels east to begin a three-game road trip that continues with Toronto and Atlanta this weekend. The first matchup takes place in Miami against the Heat, who are playing with no rest after rallying past the Pacers on the road last night. 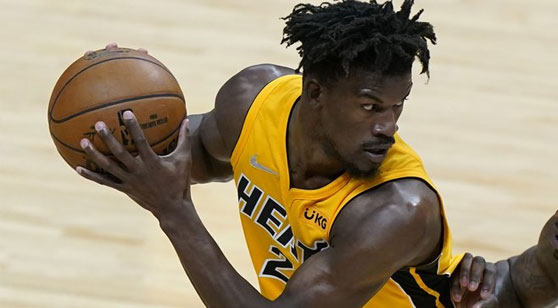 Jimmy Butler and the Heat return home after beating the Pacers on Wednesday night in Indianapolis. (AP)

Miami trailed by 15 points in the third quarter at Indiana on Wednesday, but the Heat outscored the Pacers, 49-29 over the final 20:38 for a 92-87 victory. The Heat cashed as one-point road favorites, while avenging a pair of home losses to the Pacers last month.

Sharpshooter Duncan Robinson led the Heat with 20 points, while Jimmy Butler overcame a tough shooting night to score 16 points for Miami, who as a team shot 41% from the floor.

The Warriors snapped a four-game losing streak in Monday's 116-102 home triumph over the Bulls. The big boost for Golden State came with star Stephen Curry returning to the lineup after missing five games with a bruised tailbone (in which the Warriors went 1-4).

Miami traveled to Chase Center in San Francisco looking to snap a two-game skid after losses to the Jazz and Clippers in mid-February. The Heat jumped out to a 15-point halftime lead and held as high as a 19-point advantage, but the Warriors rallied back.

Golden State trailed, 96-81 with nine minutes remaining in regulation before outscoring Miami, 24-9 down the stretch to force overtime.

Curry drilled a pair of huge three-pointers in the extra session to finish with 25 points in spite of a dreadful 5-of-20 performance from downtown.

The win snapped a three-game losing streak to the Heat that dated back to February 2019.

Obviously the return of Curry to the lineup gives Golden State a chance to win, as the Warriors lost the previous four games without him by 16, 22, 10, and 8 points.

Golden State is right in the mix of the playoff picture in the Western Conference, sitting tied for 9th place with Memphis entering Thursday's action.

Playing away from the Bay Area has been tough for Steve Kerr's team this season, as the Warriors are 2-6 in the last eight on the highway, while covering only once in the last six opportunities as an underdog.

Keep an eye on the total, as Golden State is riding a 9-2 'under' run in the past 11 games away from the Chase Center.

Miami was slumping through a six-game skid before knocking off New York and Indiana on the road. The Heat are back at the .500 mark, which has been a tough place to stay this season for last year's Eastern Conference champions.

Erik Spoelstra's squad starts a four-game homestand in which Miami can easily sweep it by facing the Cavaliers, Grizzlies, and the beat-up Lakers following Golden State.

However, home is not where the heart is (or the wins are) for Miami of late, as it has dropped four straight games at American Airlines Arena, while the only home triumph in the month of March came against lowly Cleveland.

Miami has been up and down with no rest this season by posting a 3-4 SU and 4-3 ATS mark on the second leg of a back-to-back.

The Heat have struggled at home and the Warriors have struggled on the road recently, but Miami has looked good on the defensive side and this shouldn't be a run-and-gun affair.