The Golden State Warriors are eager to get back on the court after their historic loss to the Toronto Raptors on Friday night. They were outscored by an NBA record 51 points in the second and third quarters on their way to a 130-77 defeat.

The oddsmakers think they won’t have any trouble bouncing back against the Atlanta Hawks on Sunday night though, installing the Warriors as short road favorites. 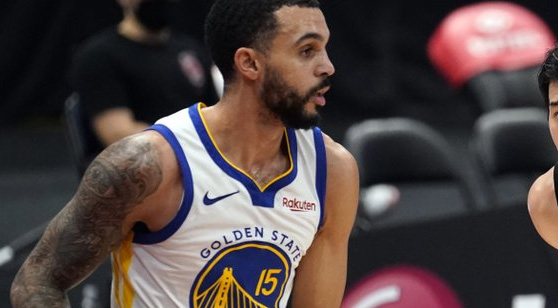 Golden State has dropped four straight on the road, which includes a 53-point loss against Toronto this past Friday. (AP)

Atlanta was one of the NBA’s best teams in March. The Hawks started the season 14-20, but they have rallied to win 11 of their last 15 games and move over .500. They won eight in a row to start last month and get right into the thick of things in the Eastern Conference playoff race.

The Hawks went on an extended road trip at the end of the month, and this is their first home game since March 18. They started the road trip with a win over the Los Angeles Lakers, but they subsequently lost four of their next five as they faced contenders like the Clippers, Nuggets, and Suns.

The one team Atlanta beat in this stretch was Golden State. The Hawks beat the Warriors, 124-108 as John Collins netted a career-best 38 points on 14 of 19 shooting. Trae Young had 15 dimes and Clint Capela posted 15 rebounds for the Hawks, while Andrew Wiggins led the Warriors with 29 points.

In their last game, the Hawks beat the Pelicans, 126-103. Atlanta was without Collins and Young, but New Orleans didn’t have Zion Williamson or Brandon Ingram. That led to Bogdan Bogdanovic and Kevin Huerter taking over, and they combined for 50 points.

Golden State has been on a skid over the last month. The Warriors are the inverse of the Hawks with 11 losses in their last 15 games, and that has led to this team falling out of the playoff picture in the Western Conference. They have lost six of their last seven games with the only win coming against Chicago last Monday.

The defense has been a big issue during this run. They have given up 118.9 PPG over their last seven games and at least 100 points in eight straight.

It was the Warriors’ offense that let the team down on Friday in Tampa. Golden State shot 32.9% from the floor and four of five starters finished with a plus/minus of at least -32 with Stephen Curry missing the game due to injury. Wiggins was the only player with more than 10 points in the dreadful outing.

Curry is expected to return to the lineup after resting an ailing tailbone on Friday. The Warriors certainly missed him in the loss to the Raptors, and he will ensure this team is much better on offense.

The soon-to-be greatest three-point shooter of all-time is third in the league in scoring (29.2 PPG). Curry is making 47.5% of his field goals and 41.0% of his threes on the year.

It’s been clear that Wiggins will never be the standout player on a good team. However, Wiggins has been a solid second banana in the absence of Klay Thompson.