The second "Battle for Los Angeles" this season will happen at the Staples Center on Sunday afternoon. The Clippers will host the defending champion Lakers, and they will be out to beat their city rival once more.

The Clips knocked off the Lakers 116-109 in the season opener just before Christmas. Paul George exploded for 26 points in the second half to lead all scorers with 33 points on the evening. 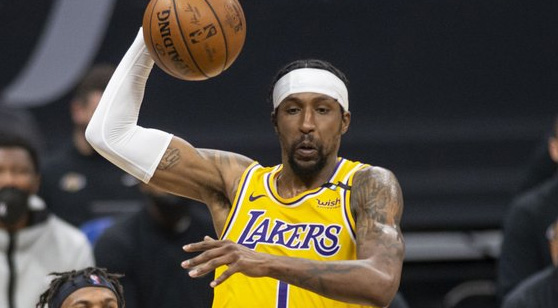 The Lakers' great defense and lack of scoring has helped the 'under' go 8-1 in their last nine games. (AP)

The Lakers were in disarray without LeBron James and Anthony Davis. They are currently 10-12 since Davis’ injury and lost four in a row after James went down with a high-ankle sprain two weeks ago. However, they have since recovered to win three of their last four games.

The 17-time champions relied on their defense to knock off both Cleveland and Orlando. The Lakers beat the Cavaliers, 100-86 last Friday behind a strong performance from Montrezl Harrell.

Guard Dennis Schroder helped lead the team past Orlando two days later before the Lakers suffered a setback with a loss to Milwaukee. We saw the Lakers go on the road and hammer the Sacramento Kings two nights ago as a short underdog.

Kyle Kuzma led all scorers with 30 points in L.A.’s 115-94 win over Sacramento. He went 11 of 18 from the floor, while Kentavious Caldwell-Pope had his first 10-rebound game of the season to help the Lakers out on the glass.

The Clippers won six in a row at the end of March. They crushed most of the teams on their slate as their smallest margin of victory was a nine-point win over Atlanta on March 22. The Clips have been at home for most of this recent stretch with a two-game jaunt in San Antonio being their only road stint since March 17.

Things haven’t gone as smoothly this week though. Although it was a light week for the Clippers, they lost home games to Orlando and Denver. They scored a total of 190 points in those two games and lost despite strong defensive performances.

Kawhi Leonard and Terance Mann had nice outings for the Clips against the Nuggets. Unfortunately, the rest of the team struggled in their 101-94 loss. Denver’s starters were dominant and scored 90 points, potentially previewing what we see from the Nuggets in the postseason.

Schroder is the top scorer on the Lakers with James and Davis out. He is averaging 15.4 PPG and 5.0 APG, but he isn’t the most efficient scorer. He is making just 43.5% of his field goals and 33.3% of his threes. Schroder is also a little turnover prone.

Harrell will be looking to lead his current team past his former one. Harrell is averaging 15.0 PPG and 6.8 RPG this season. He has been fantastic with James and Davis out of the lineup, scoring at least 18 points in seven straight games before Friday’s win over the Kings. Harrell shot 64.6% from the floor in March.

The Lakers got a great performance from Kuzma on Friday. They’ve been hoping that Kuzma would emerge as a playmaker for a while now, as he was very impressive as a rookie.

However, his 30 points against the Kings were a season-high, and he is averaging 12.8 PPG. He is making 44.3% of his field goals this season and is one of the Lakers’ top rebounders with 6.8 RPG.

This team wins games through its defense. The Lakers are one of the top six teams in every defensive shooting category. They are allowing opponents to make just 35.1% of their threes, and they rank second in scoring defense.

Rajon Rondo will suit up for the Clippers for the first time since being acquired from the Atlanta Hawks on March 25. Rondo has been dealing with a groin injury and hasn’t taken the court since facing the Clippers two weeks ago.

He will certainly be motivated against his former team, as his time with the Lakers wasn’t the best despite winning a title. The veteran guard is at the tail end of his career, but he is a solid passer that can set up his teammates off the bench.

It hasn’t been a great time for George since the All-Star Break. George was red hot to start the season, but his production has tailed off significantly over the last few weeks. He made just 40.7% of his field goals and 33.8% of his three-pointers in March.

The seven-time All-Star did not play well against Denver on April Fools’ Day either, going 5-15 and 2-7 from beyond the arc.

Leonard is the reason the Clippers have passed the Lakers in the Western Conference standings. Leonard continues to shine in his second season in Los Angeles. He has a 29.99 PER, and he is averaging 25.9 PPG while shooting 51.3% from the floor and playing incredible defense. The two-time Defensive Player of the Year has been remarkably consistent.

The Clippers haven’t been great on defense as a team. They are sixth in scoring defense, but they are outside the top ten in all the shooting statistics.

Opponents are hitting 46.8% of their shots against the Clips. This team continues to win games with its lights out shooting behind the three-point line, hitting 41.4% of their threes.

This isn’t going to be a high-scoring game. The Lakers play great defense and struggle to score without James and Davis, and the Clippers haven’t been scoring much of late. That will help the Lakers keep it within the number.