Eastern Conference NBA action will resume on Monday night with a crosstown rivalry between the Knicks and Nets during the lone matchup on NBA TV’s nationally televised slate.

Brooklyn heads into Monday’s contest as a 5.5-point favorite over the visiting Knicks, which is the first time New York has been listed as an underdog of more than five points since they matched up with Philadelphia back on March 18th.

While the total for this matchup currently sits at OU 217.5 – marking just the fourth time this season that the over-under for a Nets’ game has been set below 220. 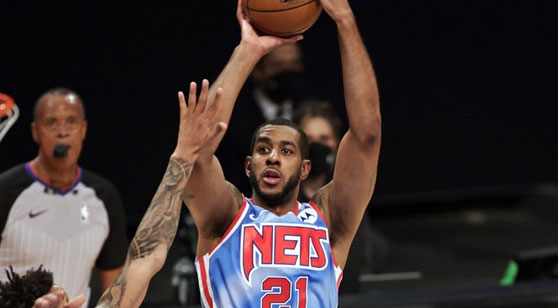 LaMarcus Aldridge and the Nets return home with no rest to battle the rival Knicks on Monday night. (AP)

The Knicks snapped a three-game losing streak with a 44-point win over the Pistons in their most recent affair, as New York eclipsed 120 points in a matchup for just the fifth time this season during its massive win over Detroit.

Julius Randle led the way for the Knicks during their victory against Detroit on Saturday – pacing New York with 29 points on 9-16 from the field, while also corralling a team-high, eight rebounds across 30 minutes of action.

Contrarily, the Nets had a four-game losing streak snapped during their matchup with the Bulls yesterday afternoon – as Chicago was able to capitalize in an event that James Harden and Kevin Durant did not participate in for Brooklyn.

Kyrie Irving and Jeff Green led the Nets in the scoring department against Chicago, with both guys chipping in over 20 points apiece in the loss.

Brooklyn has won both of its matchups against New York so far this season – with both of those contests going 'over' the total set for Monday’s tilt (OU 217.5).

The first matchup between these teams took place before Brooklyn acquired Harden from the Rockets – which was also a contest Kyrie did not participate in. The Nets seemed to have things under control in MSG though, even without their current frontcourt duo intact – as Durant managed to rack up 26 points on 10-18 from the field in a seven-point victory for Brooklyn.

Brooklyn was short-handed again in its most recent meeting against the Knicks, but still ended up carrying a similar result – as Harden and Irving played during the absence of KD this time out, and the Nets walked away with another single-digit victory over New York.

Despite losing three of their last four games, the Knicks have had a pretty solid season compared to recent years – currently sitting at 25-25 SU and 28-21-1 ATS during the current season.

The ‘under’ has been the trendy play in Knicks’ games so far this year, and rightfully so – considering the ‘over’ currently sits at 19-31 in matchups containing New York this season, which includes the total staying under in five of their last six contests.

Make note though, the total went ‘over’ during the Knicks’ most recent affair – thanks to New York torching the Pistons for 125 points, while knocking down 19-33 three-point attempts (49%).

Brooklyn has endured a revolving door of injury concerns throughout the course of this season, with the Nets issues heading into this matchup centered around the statuses of Durant and Harden – considering the Nets only generated 107 points of offense against the Bulls yesterday, which resulted in their first loss since March 24th.

Betting the ‘over’ in Nets’ games has been one of the most consistent plays across the league this year – with the total going over at a 29-20 clip in matchups containing Brooklyn so far this season.

Make note though, the total has stayed 'under' in seven of the last eight Nets’ games.

R.J. Barrett has cooled off due to a variety of circumstances over the last few games – having scored less than 18 points in three of New York’s last four contests.

Prior to that stretch though, Barrett managed to eclipse that number in four straight matchups – with his lowest scoring output during that timeframe being his 19-point performance against the Sixers.

I’ll back Barrett to bounce back with a solid night on the scoreboard tonight.

Prior to Monday’s matchup, the over-under had been set below 220 in just three Nets’ games so far this season, which resulted in the over easily cashing in all three of those matchups – including one matchup against the Knicks (@ DET, @ MEM, @NYK).

I’ll take the ‘over’ here, as I believe the bar for this contest has been set a little bit too low – especially considering three of the last four matchups containing Brooklyn have gone 'over' the number set for Monday’s affair, despite the 'under' cashing in all four of those contests.