Western Conference NBA action will resume on Wednesday night with the Suns set to host the Jazz during the final matchup on ESPN’s nationally televised slate.

The Suns enter Wednesday’s contest as a 2-point underdog against the visiting Jazz – marking the 20th consecutive game Utah has been favored in.

While the total for this matchup currently sits at OU 225.5, which is the highest over-under set for a Suns’ game since Phoenix squared off with the Timberwolves back on March 19th (U 233). 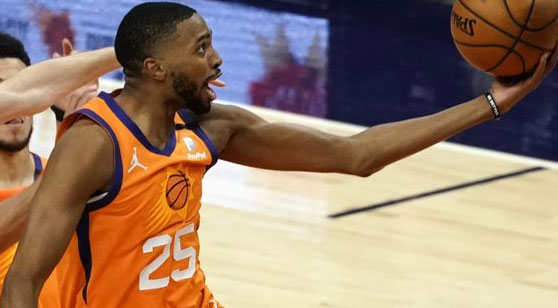 The Suns own a 6-2 ATS record in the underdog role this season as the face the Jazz at home on Wednesday. (AP)

Phoenix heads into Wednesday’s matchup riding a six-game winning streak – with the Suns most recent loss coming at the hands of the Magic back on March 24th.

The Suns’ previous contest resulted in a 3-point win over Houston – which was propelled by 36 points from Devin Booker, who knocked down 11 of 20 field goal attempts and 6-8 three-point attempts on the way to a narrow victory for Phoenix.

On the other hand, the Jazz head into Wednesday boasting wins in nine of their last 11 games – despite Utah being unable to cover the spread in over half of those contests.

The Jazz had a nine-game winning streak snapped by Dallas in their most recent affair, as Luka Doncic racked up 31 points while knocking down 6 of 11 three-point attempts during the Mavericks’ 8-point victory over Utah.

The Suns have now won back-to-back regular season matchups against Utah – with the first of those contests taking place back in February of last year, and the most recent meeting between these teams occurring on New Year’s Eve of this season.

Donovan Mitchell battled it out with Booker on the scoreboard during the most recent matchup between these teams – with the opposing superstars being the only players to eclipse 20 points in the contest.

Ultimately, Booker received more help from his supporting cast in the matchup though, which led to a 11-point victory for the Suns – as five additional Phoenix players cracked double-digit scoring in the contest, to go along with their superstar’s stellar performance.

The Jazz currently own the best record across the whole NBA at 38-12, while also owning the third highest clip against the spread at 31-19 – only trailing the Suns and Grizzlies in that department.

The total has now stayed 'under' in three of the last four Jazz games, with the only contest that went over during that timeframe happening thanks to Utah racking up 137 points against the Magic during a 46-point blowout (O 216.5).

That low-scoring trend is consistent with how Utah’s games have played out this season too – with the ‘over’ currently sitting at a 23-26-1 clip in matchups containing the Jazz so far this year.

The Suns enter Wednesday’s contest having won nine of their last 10 games – currently giving Phoenix the second-best record in the NBA, which falls just two-and-a-half games behind the league-leading Jazz.

Betting the total in Suns’ games has been a roller-coaster ride this season – with the ‘over’ cashing in roughly 51% of matchups containing Phoenix so far this year.

Make note though, there has been some newfound consistency in scoring-volume during the Suns most recent stretch of games – considering the total has gone 'over' in four straight contests for Phoenix.

Booker has been red-hot over the Suns most recent stretch of games – having scored 32 or more points in four of his last five contests, with the two-time All-Star’s lowest scoring output during that span being his 21-point performance in a win over the Hawks.

I’ll back Booker to have another big night on the scoreboard here, as I expect Phoenix to heavily rely on their superstar’s ability to create shot-opportunities in isolation against a defensively stout Jazz team on Wednesday night.

The Suns head into Wednesday’s contest riding a six-game winning streak – with Phoenix’ most recent defeat coming at the hands of the Magic back in March.

While the Jazz finally had their nine-game winning streak snapped in a matchup with Dallas this past Monday – despite posting a record of 5-5 ATS during their last 10 games. I’ll take Phoenix with the points here, as the Suns possess the tools that typically give Utah headaches on both ends of the floor, and I think those headaches will continue tonight.