The Portland Trail Blazers (30-20) travel to meet the Utah Jazz (38-13) at Vivint Arena in Salt Lake City on Thursday at 10 p.m. ET in a Northwest Division battle.

The Blazers dropped Tuesday's game on the road against the Los Angeles Clippers by a 133-116 score as 6.5-point underdogs, snapping a four-game road winning streak. The Jazz are on a rare two-game losing streak, falling at Phoenix by a 117-113 count in overtime on Wednesday in the front end of a back-to-back.

The Trail Blazers continue its road trip on Thursday, and the Jazz are a touchdown favorite over the third-place visitors. The Jazz sit atop the Northwest Division, and they're looking to avoid their first three-game losing streak of the season.

The total is set at 231 for Thursday's battle. Both the Blazers and Jazz are each coming off OVER results in their most recent outing, and Portland has hit the OVER in five of their past seven games overall, including five in a row on the road. 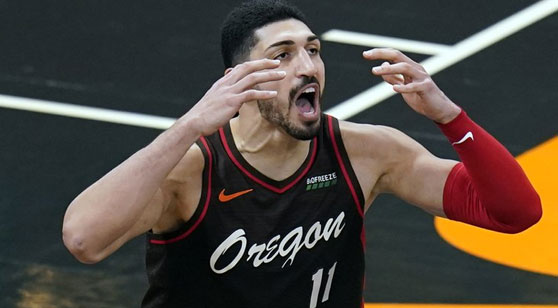 The Trail Blazers have dropped two of their last three games as Portland travels to Utah on Thursday night. (AP)

Portland was roughed by 133-116 on the road against the Clippers, and they're just 1-2 SU/ATS across the past three outings after a four-game win streak from March 25-31, all on the road. The OVER also cashed in each of those four outings away from the Pacific Northwest.

Utah was dumped 117-113 in overtime at Phoenix, falling as a 2.5-point favorite. The Jazz have dropped each of their past two as a favorite, and they're just 1-4 ATS across the past five outings. On a positive note, Utah has scored at least 111 points in 26 of their past 27 games overall.

Utah has been dominant at home, winning 137-91 over the Orlando Magic in their last game in SLC, while slipping by the Chicago Bulls 113-106 in the front end of that back-to-back set. Utah has won 23 straight games at home since last being tripped up by the Phoenix Suns on New Year's Eve.

The last time these teams faced each other was around the holidays. In fact, it was the regular-season opener, and Utah was an unruly house guest when they came away with a 120-100 win on the road as two-point favorites as the UNDER connected.

Not a lot has changed since that opening salvo for the Jazz. They're still a powerful offense, sitting atop the Northwest Division. The Blazers are still rather middling, and still searching for some consistency.

The Blazers have a couple of things going well for them. First off, they're an amazing offense, as you would expect with the likes of Damian Lillard on the roster. They have rolled up 115.2 points per game to rank fifth in the NBA, and they're sixth in the league hitting 38.2% from behind the three-point line. They're also an impressive 83.3% from the free-throw stripe, good for third in the NBA.

On the flip side, Portland has allowed 115.2 PPG to rank 26th in the NBA, and they're 28th in defensive field-goal percentage at 48.0. As such, it's probably no surprise that the OVER is 5-2 in the past seven games overall.

In addition, Portland has hit the OVER in four of its past five against winning teams, while cashing in eight of the past 10 games as a road underdog and 11-5 in the past 16 overall as a 'dog.

The Blazers head into this one with covers in five of the past seven as a road underdog, but they're just 1-4 ATS across the past five as a 'dog and 0-4 ATS in their past four tussles with a winning overall team.

The Jazz have struggled against the number on the road, but they're a great play when they're on their home floor. Utah has cashed just once in the past five games overall, but they're 20-8 ATS across the past 28 games overall. They're also 17-4 ATS in the previous 21 as a home favorite.

Utah checks in on the second half of a back-to-back, and that's good news for bettors. The Jazz seem to get stronger with no rest, cashing in six of the past seven in the second end of consecutive games.

The OVER has connected in four of the past five meetings in this series, too.

Neither side has really been lighting the world afire lately, so you have to look at a couple of factors. One, Utah hasn't lost three games in a row all season, and they're 0-2 SU across the past two. Two, the Jazz have the better overall body of work, and they're dominant on their home floor.