Non-conference NBA action will resume on Friday night with the Pelicans set to square off with the Sixers at 8:00 eastern time in The Big Easy.

Philadelphia enters Friday’s matchup as 6-point road-favorite over the Pelicans – marking the third consecutive contest that New Orleans has been listed as an underdog in.

While the total for this event currently sits at OU 228.5, which is just the ninth time that the over-under for a Pelicans’ game has been set below 230 since the start of March (18 games). 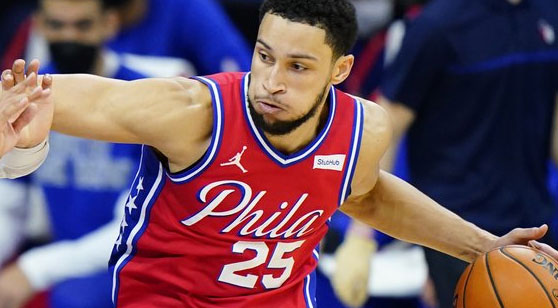 The 76ers face off with the Pelicans for the first time since December 2019 coming up on Friday night. (AP)

The Sixers head into Friday boasting wins in three of their last four games – despite Joel Embiid being absent for two of the matchups during that timeframe.

Philadelphia’s most recent contest resulted in a double-digit win over the Celtics – as Embiid torched Boston for 35 points (16-20 FT) during the Sixers’ third victory against Jayson Tatum and company this season.

Contrarily, the Pelicans come into Friday’s contest having lost four of their last five games, with New Orleans’ only victory across that stretch coming against a horrendous Rockets squad – currently ranked 15th in the Western Conference with a record of 14-37 SU.

Things kept heading south for New Orleans during their most recent matchup against the Nets too, as Brooklyn cruised to a 27-point victory over the Pelicans, despite the absence of James Harden.

The Sixers have won four straight regular season matchups against the Pelicans – with the most recent of those victories taking place back in December 2019.

Zion Williamson did not participate in the lone Philadelphia-New Orleans last season, and the Sixers managed to capitalize on both ends of the floor during his absence.

Embiid and Ben Simmons chipped in an efficient 24 points apiece in the victory, while Tobias Harris led the way for the Sixers with 31 points (12-20 FGA) during a contest that New Orleans was held to less than 110 points in.

After a 10-game absence due to a knee injury, Embiid finally returned to action during Philadelphia’s meeting with the Timberwolves last week, and didn’t look great in his first matchup back – scoring just 24 points on 6-14 from the field during a 9-point victory for the Sixers.

"The Process" stole the spotlight with his 35-point performance during Philadelphia’s victory over the Celtics on Wednesday though, as the Sixers rumbled to their third win since the start of April.

The total has been virtually a coin-flip in matchups containing Philadelphia this year – considering the ‘over’ has cashed at a 25-26 clip in Sixers’ games so far this season.