These teams are likely to at least make it to the play-in tournament, but they would rather be one of the top six teams in their conference in order to directly qualify for the postseason. 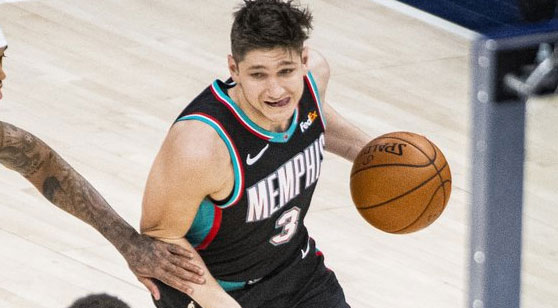 In spite of losing to the Knicks on Friday, the Grizzlies have covered 10 of their last 12 games. (AP)

Memphis has been hovering around .500 all season. The Grizzlies have never been more than four games under or three games over .500. They have been good enough to consistently beat the bottom teams in the NBA, but it’s a bit more challenging for Memphis to beat the top teams.

They have played well so far in April. The Grizzlies won their first four games to start the month with some impressive road wins against Philadelphia, Miami, and Atlanta. Those latter two victories came on back-to-back nights this week, as Dillon Brooks and Grayson Allen each popped off.

However, they couldn’t sweep their four road games against Eastern Conference teams as they fell to the New York Knicks in overtime on Friday night.

The Grizzlies took a seven-point lead into the fourth quarter, but they couldn’t hang on against the Knicks. Julius Randle had a triple-double for New York, and R.J. Barrett came up big in overtime. Jonas Valanciunas notched his 13th consecutive double-double for Memphis, but it wasn’t enough.

Indiana has yet to win more than three straight games this season. It’s been a rough year for the Pacers, and they might end up with their first losing season in six years under new coach Nate Bjorkgren. They did knock off the Grizzlies in their first meeting back on Groundhog Day though.

Domantas Sabonis had a monster game against Memphis. He went 13 of 15 from the floor for a game-high 32 points with 13 rebounds to boot. Myles Turner had a double-double as well in the 134-116 Indiana win. The loss snapped a seven-game winning streak for the Grizzlies.

The Pacers have won two in a row coming into this tilt. They beat Minnesota 141-137 on Wednesday and nipped the Magic 111-106 in Orlando on Friday night. Aaron Holiday led Indiana with 20 points in 23 minutes of action of the bench, and Doug McDermott poured in some points too.

Caris LeVert has been back on the court for a month now. He was sidelined for two months after a post-trade physical revealed he had cancer on his kidney, but he made his Indiana debut in mid-March.

LeVert has been understandably rusty, and although he is averaging 16.4 PPG and 4.6 APG with the Pacers, he is only making 41% of his field goals and 30.3% of his threes.

The leading scorer on the Pacers is Malcolm Brogdon. The former Virginia standout is averaging 21.2 PPG and 5.9 APG. Brogdon is a strong perimeter defender that is making more than 40% of his threes, but he didn’t play well in his return to the lineup against Orlando on Friday.

Sabonis is making 52.6% of his field goals while averaging 19.9 PPG and 11.3 RPG. Sabonis would probably be the best passing center in the league if not for Nikola Jokic, inheriting that from his father, the legendary Arvydas Sabonis. He is not nearly the same perimeter shooter though, hitting just 30.5% of his threes.

Indiana leads the league in fastbreak points with 15.9 PPG on the break. The Pacers are one of the best teams at scoring in the paint, but this is one of the worst rebounding teams in the league. They are pulling down just 49.5 RPG (29th in the NBA), and opponents are outrebounding the Pacers by five boards a game.

Last season’s Rookie of the Year is the leader for Memphis. Ja Morant turned a lot of heads with his play, proving any skeptics wrong after his improbable development at small Murray State.

Morant is having a solid sophomore season, averaging 18.8 PPG and 7.4 APG for the Grizzlies. His abysmal three-point shooting is a problem though. Morant is making just 25.5% of his treys on the year.

Jonas Valanciunas is playing well for the Grizzlies. He is averaging 16.3 PPG and 12.4 RPG this season, and almost a third of those rebounds are on the offensive glass. That has helped Memphis get much needed second chances as this isn’t the most efficient offense. Valanciunas has shot at least 69% from the floor in each of his last four games.

With De’Anthony Melton potentially out due to a sore leg, Grayson Allen and Desmond Bane will see more action.

Allen is making 40.2% of his threes with the Grizzlies, while Bane is hitting 44.6% of his triples. Along with Melton (45.6% three-point shooter), these are the only three rotation players that are making more than 37% of their threes.