The Miami Heat surprised a lot of people by winning the Eastern Conference last year. Miami thrived in the Orlando bubble, but this team hasn’t been the same this season.

The Heat are currently sixth in the Eastern Conference with a record of 27-25, and they would draw a tough first-round opponent if they don’t get into the top five. They are just 12-12 away from home, but they are hoping to move over .500 with a win over the Portland Trail Blazers on Sunday night. 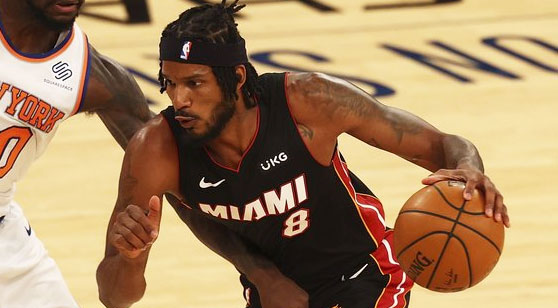 The Heat travel to the Pacific Northwest looking to avenge a home loss to the Blazers last month. (AP)

Portland is currently sitting in sixth place in the Western Conference standings. The Trail Blazers are 31-21 after their victory over Detroit last night. They have played extremely well this year considering Jusuf Nurkic and C.J. McCollum both missed significant time, so this team must be considered a sleeper ahead of the playoffs. Portland is set to make the postseason for the eighth straight season, and the Blazers are only two years removed from making it to the Western Conference Finals.

The Trail Blazers are 10-7 since the All-Star Break. They have not defeated a real contender over this stretch, and their last victory over a top four team in either conference came against Philadelphia on February 11. They have already lost to the Bucks, Clippers, and Jazz in April, but they did beat the Pistons at home last night.

Enes Kanter grabbed a franchise record 30 boards against Detroit. He had one of the most impressive games of the season with 24 points and 12 offensive rebounds, spearheading Portland’s 118-103 win. Damian Lillard and McCollum teamed up for 53 points in the victory with Lillard notching 10 assists.

Miami has been streaky throughout the season. The Heat have gone on runs and droughts over the last two months. They won 11 of 12 games between mid-February and mid-March, but they lost six in a row shortly after the All-Star Break. The Heat are in the middle of another run with wins in five of their last six games.

One of their losses during the six-game losing streak was to Portland. Bam Adebayo had 29 points, nine rebounds, and seven assists, but Tyler Herro and Kendrick Nunn were the only other players that really helped on the offensive end with Jimmy Butler and Goran Dragic sidelined due to injury. McCollum exploded for 35 points for Portland.

Butler led the Heat past the Los Angeles Lakers on Thursday night. He went 8-11 from the floor to lead Miami with 28 points in a 110-104 win.

The secret is out on Adebayo. He came into his own last year, and he is arguably the most important player on the Heat. Adebayo is averaging 19.1 PPG, 9.5 RPG, and 5.4 APG for Miami this season. The fourth-year center is making 56.3% of his field goals and is a solid free throw shooter to boot.

Butler is the leading scorer for the Heat. He is averaging 21.6 PPG and is making 49.6% of his field goals. However, Butler has been abysmal from beyond the arc this season. He is making just 22.2% of his threes, hampering his effectiveness. Although Butler hasn’t been shooting well from downtown, he has made his impact felt in other ways. His 7.2 APG and 2.0 SPG are tops on the team, and he is pulling down 7.4 RPG too.

Miami is one of the worst three-point shooting teams in the NBA. Duncan Robinson is the only player making more then 40% of his threes, as the Heat are making just 34.7% of their triples as a team. Additionally, they rank dead last in field goals made and attempted per game, as this team is led by its defense.

The Heat have the best interior defense in the league. They are allowing just 40.2 PPG in the paint, and they rank third in scoring defense (107.4 PPG). The perimeter defense has been spotty at times though.

Portland will be at full strength once again whenever Zach Collins makes his season debut. Collins has been sidelined with an ankle injury all year, but he is expected to come back before the end of the regular season. He will be rusty whenever he returns given the long layoff, yet he can give this team a boost as the Blazers always seem to need a big man.

Lillard and McCollum are the leaders of the Blazers. Lillard is one of the top scorers in the league, averaging 29.0 PPG. He is averaging 7.7 APG and making 44.2% of his field goals and 37.8% of his threes on the year. His biggest strength is his propensity to get to the free throw line, as he is a 92.9% free throw shooter.

The Trail Blazers rank third in free throw shooting (83.2%) and sixth in three-point shooting (38.1%). However, Portland has had a hard time scoring inside the arc, ranking 28 th in two-point shooting (50.2%).

Portland is at a bit of a disadvantage after playing last night, while Miami had two days of rest prior to kicking off a four-game West Coast swing. The last game between these teams saw 247 points scored, so the over is the play considering how Miami can win on the interior and Portland can win on the outside.