Non-conference NBA action will resume on Tuesday night with the Trail Blazers set to host the Celtics during the final matchup on TNT’s nationally televised slate.

Portland enters Tuesday’s contest as a one-point favorite over the visiting Celtics, which is the second straight game Boston has been listed as an underdog in.

While the total for this event currently sits at OU 227.5 – marking just the second time the over-under for a matchup containing the Blazers has been set above 225 across Portland’s last eight affairs. 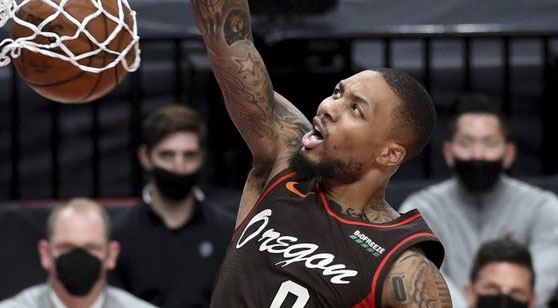 Damian Lillard and the Blazers have lost four of their past six games as they host the Celtics on Tuesday. (AP)

The Celtics head into Tuesday’s contest boasting victories in five of their last six games – with Boston’s only loss during that time period coming in a double-digit loss to the Sixers, which has proven to be a matchup-nightmare for Brad Stevens' squad so far this year (Embiid – 38.3 PPG, L3 vs BOS).

The Celtics trailed Denver by five points heading into the fourth quarter of their most recent matchup. Boston rallied back behind some phenomenal defense down the stretch of that contest though, and ended up running away with the contest by 18 points.

The Celtics were able to hold MVP candidate Nikola Jokic and the Nuggets to just three made field goals points on 13% from the floor during the final stanza of their third straight victory.

Portland closed out the month of March on a 7-2 SU run, which has positioned them comfortably in the playoff picture as the regular season slowly begins to wind down.

The Blazers have come out of the gate in a cold spell to kick off the month of April though, considering Portland enters Tuesday’s contest with a record of 1-3 SU and ATS across its last four matchups – with Damian Lillard and company’s losses during that timeframe coming at the hands of the Heat, Clippers, and Jazz.

Portland’s vulnerabilities at both ends of the floor were on full display during its trio of losses against conference-title contenders this past week, as those three defeats came by an average of 15 points, while failing to eclipse 105 points in two of those matchups.

Boston was victorious during both of its matchups against the Trail Blazers last year – with the first of those matchups taking place before the league’s Covid-19 shutdown, and the second occurring in the NBA bubble down in Orlando.

The matchup that took place prior to last year’s shutdown resulted in a 12-point win for Boston – as Jayson Tatum racked up 36 points while knocking down 8-of-12 three-point attempts in a contest that stayed just under the total set for Tuesday’s affair.

Jusuf Nurkic paced Lillard with 30 points during the second matchup between these teams, but the duo’s joint effort still wasn’t enough to gain an edge against Boston during their shootout in the NBA Bubble – as Tatum teamed up with Jaylen Brown for 64 combined points on 21-of-40 from the field on the way to a four-point victory for the Celtics.

Despite being one of the biggest disappointments in the league so far this season, Boston heads into Tuesday finally bearing some momentum – boasting wins in five of their last six games, with the Celtics’ only loss across that span coming in a tough matchup with the Sixers.

At the conclusion of March, the ‘over’ sat at a 25-23 clip in Celtics game, which is well above league-average in that department.

Since the start of April though, the total has stayed 'under' in five of six matchups containing Boston – bringing that clip all the way down to 26-28 on the year.

Portland continues to get healthier as the second half of this season rolls on, with Zach Collins being the lone Trail Blazer listed on the injury report ahead of Tuesday’s affair.

Portland’s rejuvenated lineup is still yet to translate into sustained success in the win column though – considering the Blazers head into their matchup with the Boston having lost three of their last four games.

Over the las year or so, it has become evident that Portland possesses the adequate offensive weaponry to go toe-to-toe with any of the league’s top teams. It’s hard to beat the Blazers up too much about their recent stretch of defeats though – considering Portland’s losses during that timeframe came against high-caliber squads in the Jazz, Clippers, and Heat.

Portland has leaned to the ‘high-scoring’ side of the spectrum for the majority of this season – with the ‘over’ currently sitting at a 28-25 clip in matchups containing the Trail Blazers so far this year.

Make note though, Portland has flipped the script in the pace department lately – leading to the total staying 'under' in five of the last six Blazers’ games.

The Celtics, as a team, may be difficult to trust right now – especially against a squad wielding the caliber of offensive weaponry that Portland typically does.

Lately though, Tatum has produced at a high-volume regardless of the outcome in Boston’s affairs.

Heading into Tuesday, Tatum has scored 25 or more points in four of six outings since the beginning of April, with his lowest scoring output across that stretch being his 20-point performance against a defensively stout Philadelphia unit.

I’ll back Tatum to stay hot on the scoreboard here, in what should be a solid, back-an-forth battle with Portland.

Despite Portland’s injury report being the emptiest it has been since the start of the season, the Trail Blazers head into Tuesday having dropped three of their last four contests.

It’s hard to hold Portland fully accountable for its lack of prosperity over the last few games though, considering the Blazers’ losses during that timeframe came in tough matchups with Utah, Los Angeles, and Miami.

I’ll back Portland to bounce-back here, as Boston is surely due for a letdown spot after narrowly skating past the Timberwolves, Knicks, and Nuggets this past week.