The Los Angeles Clippers (37-18) will tangle with the Indiana Pacers (25-27) at Bankers Life Fieldhouse in Indianapolis on Tuesday night at 7:30 p.m. ET on TNT.

The Clippers are kicking off a three-game road trip after an extended nine-game stay in Los Angeles, including wins in each of the past five outings. The Clips haven't had the bags packed since a two-game visit to San Antonio for a sweep of the Spurs March 24-25 while covering both ends.

The Pacers enter on quite the roll themselves. They have registered three straight victories, including a 132-125 road win over the Memphis Grizzlies last time out on Sunday to cover as 3.5-point underdogs as the OVER (235) connected. Indiana's offense has been on fire of late, going for 132 or more points in three of the previous five outings. 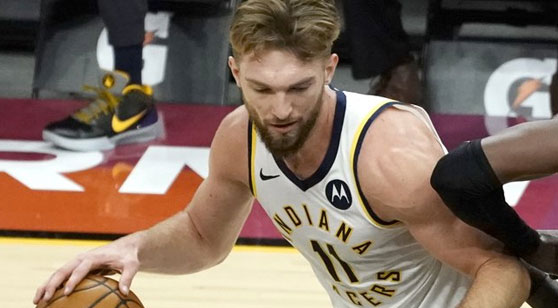 Domantas Sabonis and the Pacers return home looking to improve on a 7-17 ATS mark at Bankers Life Fieldhouse this season. (AP)

The Clippers have rolled up five straight victories, including a 131-124 win over the Detroit Pistons last time out as 13-point favorites. While they failed to cover in that one, it was quite an impressive win considering they rested star Kawhi Leonard.

The Clippers were a perfect 4-0 ATS from April 4-9. They are actually just 2-5 ATS over the past seven tries against Eastern Conference opponents, although they have won four of the past five outright.

Los Angeles continues to be one of the top offensive teams in the NBA, and they're also near the top in a lot of defensive categories.

The Clippers rank fourth in the league in scoring average (115.1 PPG), and they're fourth overall at 48.6% shooting. In addition, they have hit 42.1% from behind the arc to rank No. 1 in the NBA in three-pointer shooter percentage. The Clips also check in first at 83.9% from the free-throw stripe.

Defensively, L.A. has allowed just 108.3 PPG to rank sixth overall in scoring defense, and they're 12th against the three with opponents hitting 36.2%.

Indiana is coming off a 132-125 win on the road against Memphis on Sunday, and they have won three straight overall. The last time they played on their home court, they outlasted the Minnesota Timberwolves 141-137 as two-point underdogs as the OVER (233) connected.

The Pacers have won four of the past five games overall to creep back to within two games of the .500 mark, and they're in second place in the Central Division while right on the cusp of getting back into the playoff hunt.

The last time these teams suited up it was an ugly loss for the Pacers. They took it on the chin at Staples Center, falling 129-96 to the Clippers, not coming anywhere near covering the eight-point number. The OVER (219) connected then.

Prior to the COVID shutdown last season, these teams met just once on Dec. 9, 2019. The Clippers came away with a 110-99 win in Indianapolis that day, and the Pacers have lost three straight in this series since a 116-92 win Feb. 7, 2019 in Indianapolis as 6.5-point favorites.

The Clippers stroll in with five victories in a row, and they have covered four of the past five. As mentioned, they didn't hit last time out against the number, but they also played without arguably their best player, as Leonard was taking a maintenance day.

L.A. has won three of the past four games on the road, while going 3-1 ATS during those outings. The UNDER is 3-1 in those four road contest, too.

The Pacers registered a 132-125 win over the Memphis Grizzlies last time out, and they have rattled off four consecutive straight-up wins and covers against Western Conference teams since a 121-106 setback at Denver on March 15. They have also hit the OVER in each of the past three vs. West.

Indiana has averaged 113.5 PPG overall on the season, which is good for 11th in the NBA. That's pretty good, but they have taken it to a new level lately, posting 132 or more points in three of the past five, averaging 124.0 PPG.

A big part of their offensive success has been the stellar play of C Domantas Sabonis. He racked up 18 points and 15 rebounds in Memphis, and he has 10 or more boards in each of his past seven outings. Caris LeVert is finally healthy for the Pacers and hitting his stride, including 34 points last time out.

Indiana is just 1-3 SU across its past four home games, so that's a little bit of a concern. They had their schedule interrupted due to the NCAA Tournament being held in their arena for most of March, but they're finally starting to settle back into a routine and their play on their home floor should be improved.

The Pacers have also kept the scoreboard operator busy, dumping in 132 in Memphis last time out, and hitting 132 or more points in three of the past four. They will fare better against the Clips than they did in the first meeting in L.A., but they won't be able to avoid a loss.

It will be an entertaining game, however, as the national television audience will be treated to a high-scoring affair.